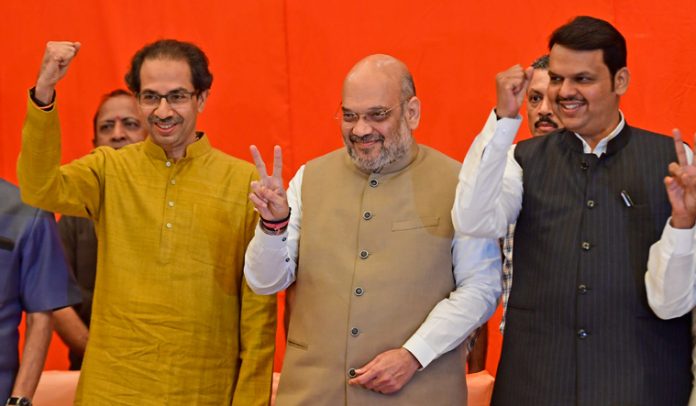 Leaving behind the enmity of almost five years now, meetings of grass root level followers of Bharatiya Janata Party and Shiv Sena were held on March 14th Friday, in Amravati city of Vidarbha area in Maharashtra.

Leaders of both the parties were present on the stage. Shiv Sena chief Uddhav Thackeray reportedly said that, ‘The past five years there were lot of incidents when both the leaders had hit out at each other. Now, it is the right time to forget the differences, both in mind and heart.’

The seat share for BJP and Shiv Sena are 25 and 23 respectively. Shiv Sena had recently decided on contesting the Lok Sabha polls in alliance with BJP. In 2014, the two parties contested the Lok Sabha election jointly and won 41 out of 48 seats. Swabhimani Shetkari Saghtana (then in NDA) headed by Raju Shetti also won one seat.

The Bharatiya Janata Party and Shiv Sena are set to kick-start their election campaign in Maharashtra by 24th of March, a joint statement issued by both parties inform. Rallies and campaigning will be organised jointly by both the parties in the state. From Kolhapur, the first rally will begin, bringing a start to the campaigning for upcoming Lok Sabha elections. A joint manifesto will also be released by both the political parties.

The Shiv Sena has been in alliance with BJP for the past many decades. However, they broke up their alliance in 2014 for a short period on issues of seat sharing, right before the legislative elections in the state. The Bharatiya Janata Party demanded more number of seats for their contestants, which wasn’t accepted by Shiv Sena.

In the election that followed this fallout, BJP won 122 seats and Shiv Sena managed to get only 63 seats out of the total number of 288 seats. Later, Shiv Sena decided to join the BJP government led by Chief Minister Devendra Fadnavis.

Twitter launches feature to give premium ad space to brands