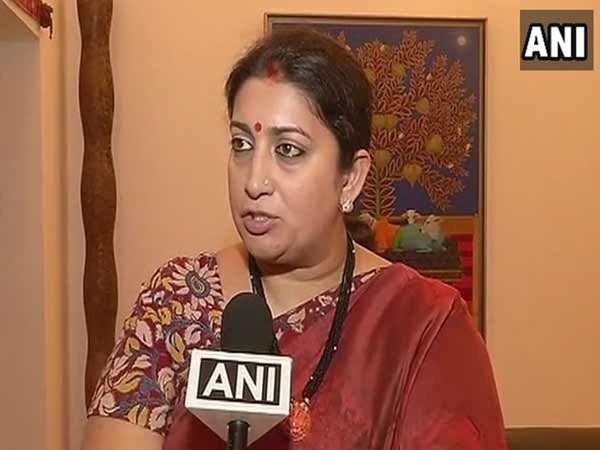 Union minister and BJP’s Amethi candidate Smriti Irani on Monday accused Congress and its president Rahul Gandhi over booth capture in the constituency. She alleged that the Congress workers were capturing booths and forcing voters to cast their votes for the Congress in Amethi.

“Alert @ECISVEEP Congress President @RahulGandhi ensuring booth capturing,” her tweet said to alert the Election Commission. Along with the tweet, Smriti also tagged a video of a woman who claimed that she was made to vote for the Congress. The woman said that one of the officials forcefully put her finger on the Congress button. “They held my hand and forced me to push the Congress’s button. I wanted to vote for the lotus symbol,” the woman said repeatedly in the video tweeted by Irani. But, there is no written complaint on the issue.

She told media that Rahul Gandhi was now resorting to stealing votes. “They said that ‘chowkidar chor hai’, but they are the ones who are stealing votes. Rahul Gandhi will have to answer for such acts and the administration must look into the matter,” she said. But, her supporters said that they would soon lodge a formal complaint with the returning officer in this regard.

“Hope they take action,” Irani told ANI. “People of the country have to decide whether this kind of politics of Rahul Gandhi should be punished or not.”

However, Congress dismissed Irani’s allegations and said the BJP candidate is looking for excuses to justify her defeat. “It now is more than clear that she has lost,” Congress spokesperson Zeeshan Haider told the Hindustan Times. “Now, she is looking for excuses. If Rahul Gandhi Ji is capturing booths, and capturing votes, then what is the Election Commission doing that has been working in a biased manner in favour of Modi and Amit Shah ?”, he added.

Congress President Rahul Gandhi is seeking re-election from Amethi, the constituency he has held since 2004. In the 2014 election, he won by a reduced margin of about one lakh over his challenger Smriti Irani of the BJP. There are five assembly segments in the Amethi Lok Sabha constituency — Amethi town, Gauriganj, Jagdishpur, Tiloi and Salon. Of the five assembly segments, four are represented by the BJP and one by the SP.

US President threatens to ‘devastate’ Turkey if Kurds are attacked