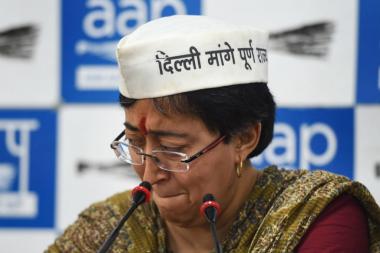 “The language in this pamphlet is so abusive and low that everybody will feel ashamed while reading it,” said Sisodia. He tweeted, “You want to be elected by distributing these handbills against me and Atishi?” he asked. “Shame on you Mr Gambhir! People of East Delhi know me and Atishi very well but through these handbills, you have introduced yourself. This is your character.”

Aatishi, who broke down while reading the pamphlet, asked how can Gambhir ensure the safety of women if he is stooping so low to win the seat.

Arvind Kejriwal also criticised Gambhir and tweeted, “never imagined Gautam Gambhir to stoop so low. How can women expect safety if people wid such mentality are voted in? Atishi, stay strong. I can imagine how difficult it must be for u. It is precisely this kind of forces we have to fight against.”

On the other hand, BJP spokesperson Syed Zafar Islam responded that BJP is disciplined and won’t resort to such practices. “These are allegations made by AAP and you know the history of AAP, they have always made these kinds of allegations only to prove a point and gain some sympathy vote. But it will not happen, she’s a losing candidate and AAP is losing everywhere,” he responded to Mirror now.