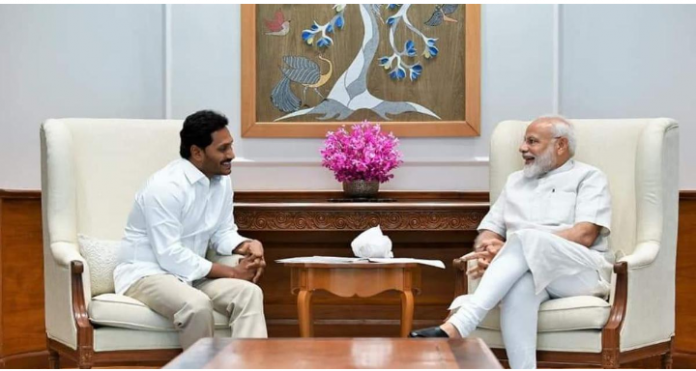 YSR Congress President and Andhra Pradesh chief minister-designate Y.S. Jaganmohan Reddy met Prime Minister Narendra Modi, on Sunday in Delhi. Reddy, whose party achieved a landslide victory, winning 151 seats in the 175-member Assembly and 22 out of the 25 Lok Sabha seats in Andhra Pradesh, discussed the matter of according special category status to the state, PTI reported.

“Today, we might not get it (special category status). We have to be at somebody’s mercy but I will remind him (Modi) again and again and someday things will change,” Reddy told reporters after meeting Modi at his 7, Lok Kalyan Marg residence.

Meanwhile, PM Modi tweeted “Had an excellent meeting with Andhra Pradesh’s CM designate Y.S. Jagan. We had a fruitful interaction on several issues pertaining to AP’s development. Assured him all possible support from the Centre during his term.”

Reddy congratulated Narendra Modi for leading the NDA to an astounding victory in the Lok Sabha elections. The PM also wished Jagan, whose party stormed to power on Thursday with a landslide victory in assembly polls.

Jaganmohan Reddy also invited Modi for his swearing-in as chief minister in Vijayawada on May 30. He met BJP president Amit Shah as well and sought his support for the State’s key demands.

During the election campaigns, Jagan Reddy had centred it around the Special Category Status for the state. He was elected to the state Assembly with the highest margin of over 90,000 votes while Malladi Vishnu of his party won the election with the lowest margin of 25 votes.

US Figure Skater Wins Dancing With The Stars: Athletes