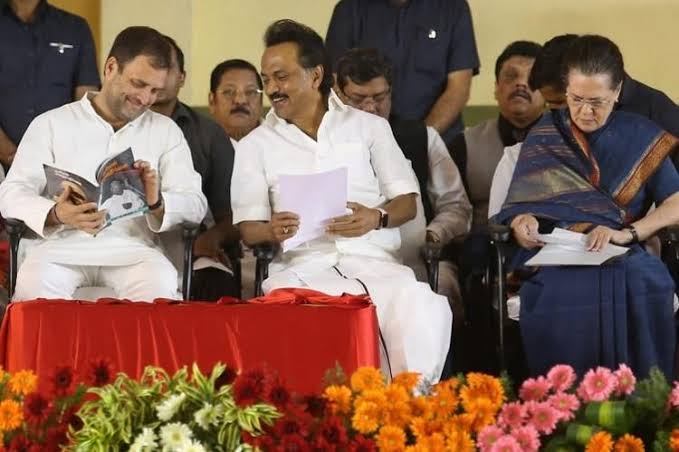 Dravida Munnetra Kazhagam (DMK) chief M.K. Stalin urges Congress president Rahul Gandhi not to quit from the seat. Stalin, on Tuesday, spoke to Gandhi on the phone and told him that he had won people’s hearts. Stalin’s request to Rahul comes amid reports that the Gandhi scion is adamant about quitting as the president of the grand old party after Congress’ dismal performance in the recently concluded Lok Sabha elections.

Rahul and Sonia Gandhi had congratulated Stalin for an impressive victory of the DMK-Congress alliance in Tamil Nadu. The DMK-led front in Tamil Nadu won 37 of the 38 Lok Sabha seats. The election in the Vellore parliamentary constituency had been cancelled by the EC citing abuse of money power.

However, Stalin will participate in the swearing-in ceremony of YSR Congress Party chief Jaganmohan Reddy as Andhra Pradesh chief minister on May 30.

Veteran actor Rajinikanth also asked Rahul Gandhi not to step down from the post of the Congress president. “Rahul should stand firm. He should prove that he can do anything. Also, a strong opposition is necessary for a democratic country. So, I request Rahul to lead a strong opposition,” Rajinikanth told the media.

Meanwhile, the newly elected 13 DMK MLAs took oath at the Secretariat on Tuesday in the presence of Speaker of the Assembly, P Dhanapal and M.K. Stalin. The tally of DMK MLAs in the Assembly has gone up to 101. In the history of Tamil Nadu Assembly, the DMK is the first principal opposition party which has more than 100 seats in the house.

Several UP Schools use ‘Islamia’ as Prefix