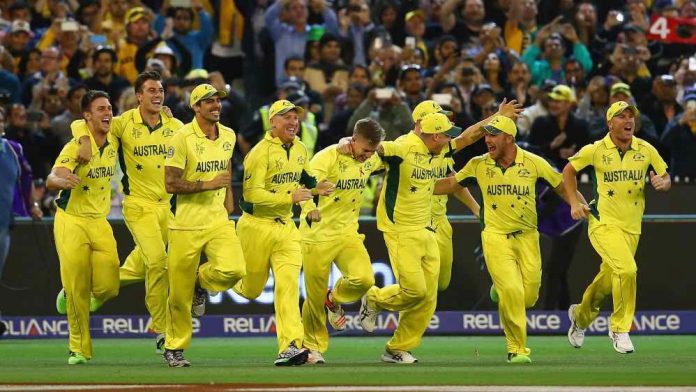 Australia extended their 100 percent start to their World Cup title defence with a 15-run win against the West Indies at Trent Bridge on Thursday. Nathan Coulter-Nile hammered the best World Cup score by a number eight as Australia recovered from 38 for four to post 288 all out.

Mitchel Starc turned the match on its head by claiming three wickets in two overs in the dead, after dismissing Chris Gayle and Andre Russel earlier. West Indies needed 38 from the last five with four wickets in hand but Starc removed Carlos Brathwaite and captain Jason Holder (51) in the space of four balls in the 46th over before returning to dismiss Sheldon Cottrell (1) in the 48th to grab his fifth wicket and end the Caribbean side’s run chase.

But, the West Indies’ chase started on the wrong foot with Pat Cummins snaring Evin Lewis in the second over caught at second slip for 1. Chris Gayle, then twice given out by umpire Chris Gaffney off Starc, once caught behind and once lbw, had both decisions reversed. The replays, however, showed that the delivery which claimed Gayle’s wicket should have been a free-hit as Starc had overstepped the previous ball, which the umpire failed to spot.

SBI to Invest Rs 80 billion in Hydropower Project of Nepal

Kindness is the best quality that sustains the relationship