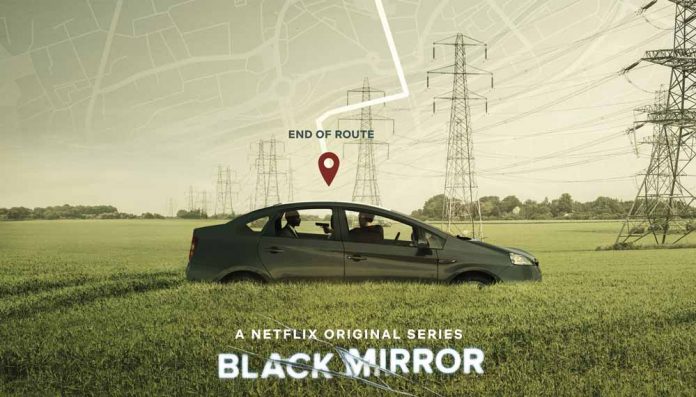 Black Mirror the British science fiction anthology series produced by Netflix is known for its dark thematic, and for exploring the consequences of technology on various aspects of Human Society. The latest season of the series explores the consequences of artificial intelligence, alternative/virtual reality and of course Social Media.

The latest season has got more star faces as compared to previous seasons with Anthony Mackie, Andrew Scott and Miley Cyrus, appearing in episodes titled, ‘Striking Vipers’, ‘Smithereens’ and ‘Rachel, Jack and Ashley Too’, respectively.

The first episode is based on the concept of virtual reality, where the protagonists “bored” of their lives in the physical world, discover their true sexual identity in the virtual reality of a game. The second episode is centred on the theme of social media and how it has engulfed “virtually”, every aspect of life, while the last episode is concerned with the theme of artificial intelligence with a “happy ending”.

As many viewers have observed, this season of Black Mirror is less Dark and Dystopian as compared to previous seasons. All the three episodes have this common theme of ‘alienation’; the epitome modern condition, where all meaning is lost leading to a situation where people are in constant search for ‘meaning’. The question who am I? Becomes more general, with more people taking the same journey through the same commuting options.

Of all the three episodes, the second one titled ‘Smithereens’ is more close to the experiences of a large proportion of population i.e. social media users; because of its easy availability. The other two themes explored in the season, namely artificial intelligence and virtual reality are still accessible to a very minuscule population as compared to social media platforms and therefore finds less resonance with experiences of a large section of the population, though the stories narrated around them seems to be in the right direction.

“Everywhere you look people are hooked on the things! It like chain-smoking”

“Smithereens” (dictionary meaning: Small Pieces) talks about the extreme consequences of addiction to social media. A Guy, who didn’t look up from his screen, becomes the hostage of a guy who checked his notification while driving and lost his fiancée because he got “bored every 10 seconds”. It only takes one notification, or blip of light to divert our attention from whatever we are doing towards our screens.

“People don’t even look up anymore; you didn’t look up and look where that got you”

The desire to be known, the social pressure to get recognized, to befriend people, to get famous, the desire to go viral, seems to have taken control of us. It has rearranged the pattern of human behaviour to such an extent that we often forget the gravity of any situation and every incident or accident becomes a potential commodity which has to be put in the public domain for consumption.

People filming or going Live or giving real-time updates of any incident/accident- without understanding their consequences- rather than intervening and stopping them has become quite common. Everything from, what we are eating, to what we are wearing, from what we are doing, to whom we are meeting, to where we are…all of these things which were understood as “private activity”, has now acquired the “public” dimension in the age of social media. Social Media has extended “private sphere”, to include “public”, as everything we do is put before an audience for consumption. The food which we consume becomes fully gratifying only after we get a certain number of ‘likes’, on the #Foodgram post!!

The episode just narrates the growing criticism of what social media or technology has done to us. How our attention span has decreased as we are on a constant look for ‘spectacles’. While “getting bored every 10 seconds” is something which we do consciously as we give into growing narcissist culture, the social media platforms- as corporations- are the ones who are actually getting more and more powerful.

Social Media platforms know where you live, what exactly you read, what your interests are, your age, your sex, your sexual orientation, when you got engaged, when you broke up, where and with whom you went for a holiday, etc. All these information which we ‘willingly’ upload, the bits of data in the system, is used by analyst on the other side –usually an AI- to draw our psychic profile- which then again is used –in a way- against us, as we become just a few bits of data in the whole system.

The most interesting part of this season of Black Mirror- which is also in the continuation of last Black Mirror episode cum film titled Bandersnatch- is that Netflix takes on and criticizes the very logic which is a part of its own business model i.e. virility and addiction. However, as mentioned above, this season of Black Mirror is less dark and Dystopian as compared to previous seasons- one point of viewer’s critique- which is basically a way of showing the positives of technology and how it can fix the alienation and other problems’, caused by the same technology, as there is no going back now.

The same theme was somewhat explored in the last novel of Dan Ban titled ‘Origins’, wherein the end of the book the brilliant scientist and entrepreneur Edmond Kirsch “logically” prophesizes the evolution of Home sapiens into an entirely a new species resulting from the fusion of Homo Sapiens and of the new species/kingdom he calls Technium, – to represent entire technological development- as human civilization grows more dependent on technology to solve the never-ending problems.

Followers of Ambedkar, Should not be Considered Naxalites, Says Athawale