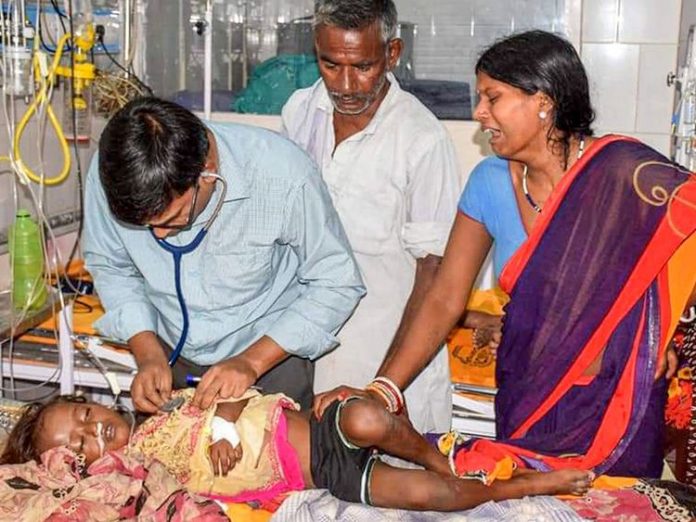 The death toll of Acute Encephalitis Syndrome outbreak in Muzaffarpur rose to 83, according to a recently published medical bulletin.

As per reports, a total of 326 suspected Acute Encephalitis Syndrome cases have been recorded since January this year – 230 at SKMCH and 96 at Kejriwal Matrisadan. Among the 93 patients who are undergoing treatment at the two hospitals – 74 at SKMCH and 19 at Kejriwal Matridan – 12 patients are reportedly in a critical condition.

It also states 69 children have died at Sri Krishna Medical College and Hospital while 14 have died at Kejriwal Matrisadan, a private hospital in Muzaffarpur, till 9 am on Sunday, reports The Times of India.

“Government has been working from the beginning,” Bihar minister Suresh Sharma told ANI. “There is no lack of medicines. However, there is a lack of beds and ICUs as compared to the emergency situation at present,” he said.

“We are trying everything and anything that can save children’s lives,” Bihar health minister Mangal Pandey said.

“Everything is being made available from medicines to doctors. We have even called doctors and nurses from AIIMS in Patna,” he added.

Bihar: Union Health Minister Dr Harsh Vardhan reaches Sri Krishna Medical College & Hospital in Muzaffarpur, to review the situation prevailing due to the outbreak of Acute Encephalitis Syndrome (AES). Death toll due to AES has risen to 80 in Muzaffarpur. pic.twitter.com/sppPkaQbvt