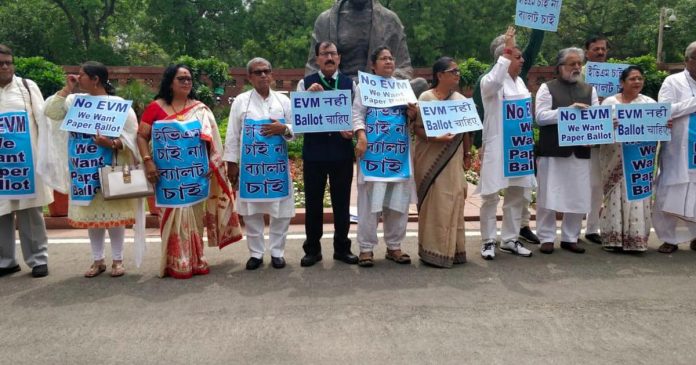 Trinamool Congress MP’s staged a protest in front of the parliament on Monday against the alleged misuse of Electronic Voting Machines. They demanded that EVM’s shall be banned and paper ballots used in its place. The protest was led by Derek O’Brien.

“EVMs can be hacked, everybody knows that,” said Kalyan Banerjee, Trinamool Congress chief whip in the Lok Sabha. “This should stop and that’s why we demand a return to ballot papers.”

“If they haven’t tampered with EVMs [electronic voting machines], they [BJP] would not have got these numbers. How did they get it,” added her.

Senior Trinamool Congress leader Derek O’Brien led the protest. MPs were seen holding placards that read “No EVM, we want paper ballot” and shouted slogans against the use of voting machines.

#Trinamool MPs protest in front of Mahatma Gandhi's statue outside #Parliament in demand of paper ballot instead of EVM pic.twitter.com/F80LyJ2yLS

Twelve parties, including Trinamool Congress, has requested the Rajya Sabha to hold a discussion on election reforms so as to conduct a free a fair elections.