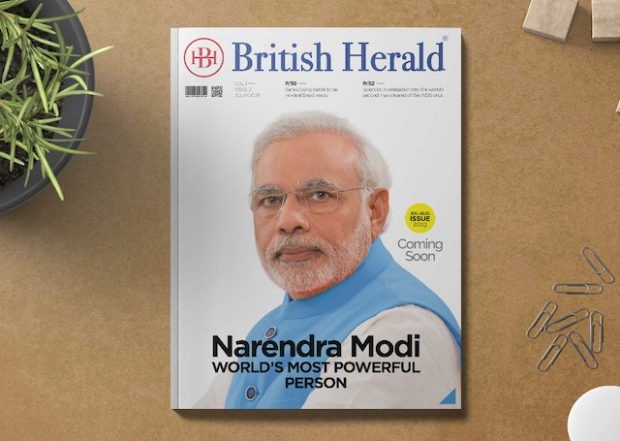 BJP leaders and BJP leaning TV channels had been celebrating the news of Modi winning the reader’s poll of an apparently U.K based website “British Herald.” The website had declared Narendra Modi, as the most powerful leader in the world.

The news was announced through twitter by  Union Minister Giriraj Singh and DD News.

It's a matter of pride when the supreme leader of our country becomes the world's most powerful man
Narendra Modi Wins Reader’s Poll for World’s Most Powerful Person 2019 – British Herald https://t.co/LuqgzqjnAy

“Modi won with 30.9% of the vote when the poll closed on Saturday at midnight. He was placed well ahead of his closest contenders, including Vlamidir Putin, Donald Trump, and Xi Jinping with 29.9%, 21.9%, and 18.1% respectively,” states the website.

But the question that most have forgotten to ask is -Afterall, What is British Herald?

Zee News referred to British Herald as a “leading British magazine”. Its story further detailed, “In yet another proof of his image of a global leader, Prime Minister Narendra Modi has been declared as the winner of a reader’s poll for world’s most powerful person 2019 conducted by a leading British magazine.”

A recent investigation by ‘Alt News’ has some interesting things to say about this website.

The website www.britishherald.com describes itself as “one among the world’s leaders in online news and information delivery.” It mentions “via Reuters” in its logo banner and carries a wide variety of world news stories.

Though it mentions “via Reuters” in its logo, the recent investigation shows that the channel is owned by a man from Kerala by the name of Ansif Ashraf.

British Herald has a global Alexa web traffic rank of 28,518, which grew from 95,979 three months ago, which means the site is nowhere near “leading.” The twitter account of the site has less than 4000 followers. How can then a readers poll be even valid?

It is also to be noted that “not a single reputed international publication has carried the news of PM Modi having won a global leader poll by a ‘leading’ British website, only Indian publications did.”

No details of methodology or the sample size of the poll are available, even though the website said that it experienced a sudden surge in traffic during the voting period.

It is alarming that the leading channels of the country published the news without proper fact-check and dubbed it as a proud moment for India. The fact that even the national channel Doordarshan telecast the news, clearly raises moral and ethical questions on Indian media.

Fire Breaks out at Chemical Factory in Hyderabad, Rescue ops on