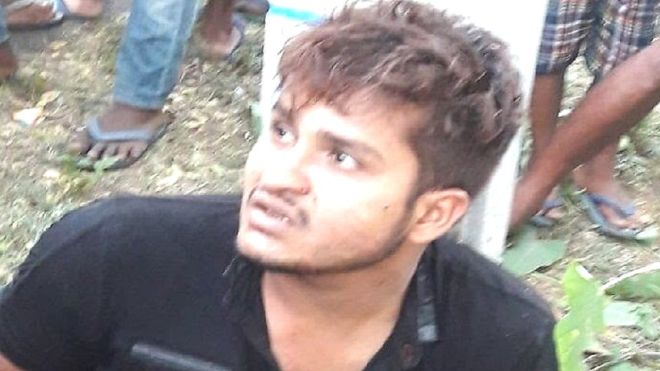 Eleven people were arrested in Jharkhand in connection with the lynching of 24-year-old Tabrez Ansari. The Hindutva mob had alleged theft on Tabrez and forced him to chant “Jai Shri Ram” and “Jai Hanuman.” The entire scene was video recorded as well. A Special Investigation Team (SIT) is also constituted to look into the issue.

Superintendent of Police Karthik S said on 17 June, Ansari and two others had entered a house in Seraikela village in the night, allegedly with an intention to commit theft. However, the occupants of the house woke up and raised an alarm, following which villagers caught hold of Ansari and “manhandled” him, while his accomplices managed to flee, the SP told reporters.

Two police officials, who were in charge of Kharaswan and Sini police stations, were suspended. Though the police reached the scene, gave first aid to him, they took him to jail instead of a hospital. It was only when his health conditions deteriorated, he was taken to a hospital where he was found to have multiple injuries, following which he was referred to Tata Main Hospital in Jamshedpur.

“We are looking into all angles. His family members mentioned some unidentified miscreants in their complaint. Based on that, we have already arrested eleven people, including a man named Papu Mandal,” SP added.

Ansari’s wife, Shaishta Ansari, has accused the police of taking him to jail first, instead of a hospital.

This is the 11th reported case of Hindutva mob lynching in the country, this year. The incident has resulted in wide-spread protest from various corners.

“A Hindu mob thrashed him ruthlessly because he refused to chant ‘Jai Sri Ram’. Is this NDA 2.0’s New India? Yeh kaunsa tareeka hai sabka vishwas jeetnay ka (what kind of a process is this to win everyone’s trust)?,” the former Jammu and Kashmir chief minister Mehbooba Mufti tweeted.

“This is the pattern with almost all lynchings. First, a Muslim is murdered by cow lovers. Then the most ridiculous excuses begin, a ‘suspicion’ of beef possession, theft, smuggling & love jihad. So much for ‘sabka vishwas’ when we can be killed over mere ‘suspicions’,” tweeted AIMIM Chief Asaddudin Owaisi.

While talking in Rajya Sabha Ghulam Nabi Azad said that Jharkhand had become a “lynching factory”.

“Dalits and Muslims are being killed there every week. Prime Minister Narendra Modi, we are with you in the fight of ‘sabka saath sabka vikas’, but it should be there for people to see it. We cannot see it anywhere,” Azad said at Rajya Sabha.

KCR Government to Ensure Measures to Support Farmers in Telangana