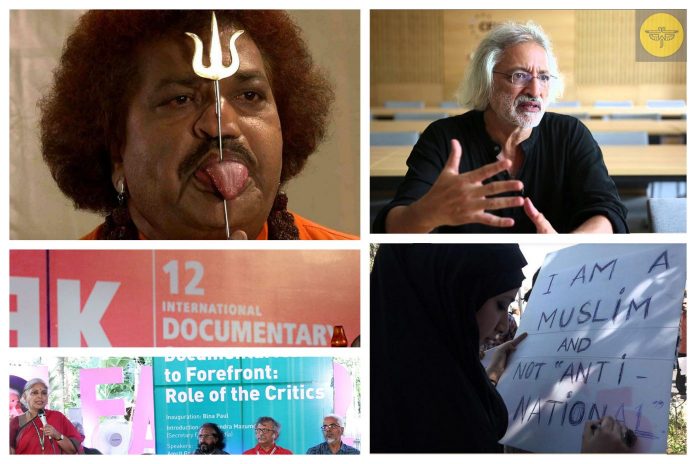 Anand Patwardhan’s documentary ‘Vivek’ (Reason) was denied permission to be screened at the ongoing International Documentary and Short Film Festival of Kerala (IDSFFK) by the Ministry of Information and Broadcasting. The film did not get censor clearance. Protesting this decision, the organisers of IDSFFK have decided to appeal to the High Court to screen the film.

The film was scheduled to be screened on June 24, however, due to these issues it has been postponed to the last day – June 26th. The ministry had said in its response to the festival organisers that screening Reason could lead to a “law and order issue”.

A 261 minutes long documentary which is divided into eight chapters, Reason sets out to chart what Patwardhan sees as India’s slide away from the complex tumult of a secular democracy towards hardening divisions of power, caste, and religious belief — lines that are enforced increasingly by violence. It also presents a criticism on Hindu terrorist organisations like Sanathan Sanstha and Abhinav Bharat.

The movie begins by looking into the assassination of scholars like Narendra Dabolkar and Pansare. Then looks into a range of issues in Modi India, including the institutional murder of Rohit Vemula, the murder of journalist Gowri Lankesh and ends in the village of Akhlaq in Dadri.

Kamal, IDSFFK director told the movie is available on YouTube and has already been viewed many times. Hence, the government cannot straightaway deny censor exemption.

Films that are screened at festivals do not require a censor certificate but a censor exemption from I&B Ministry. However, the Ministry had asked for a detailed synopsis of this film and had effectively delayed the screening.

Responding to TWJ, the secretary of Chalachitra Academy, Mahesh Panchu said, “Since the films screened here doesn’t have a censor certificate, it is mandatory to obtain a censor exemption certificate from I&B Ministry. We had sent over 161 films for censor exemption. All the films except for ‘reason’ received approval for screening. We have approached the High Court to contest this decision. The case will be heard today afternoon.”

Earlier, in the 2017 edition of the festival, the Ministry had denied exemption to three documentary films, dealing with Jawaharlal Nehru University (JNU) protests, the unrest in Kashmir, and on the Rohith Vemula issue. The films were later screened after the Academy approached the Kerala High Court.

The film was screened at many international film festivals and also had won accolades. It won the award for the Best Feature-Length Documentary at the 31st International Documentary Film Festival, Amsterdam.

Reason had its world premiere at the Toronto International Film Festival in September.

“Reason is not an easy film to watch, nor should it be. The film denounces — and depicts — violence perpetrated or fuelled by religious nationalists pushing to make India a Hindu state. As Reason builds and expands toward its conclusion, the scale of the dangers India faces becomes clear, and connections are made between the country’s inner conflicts and the similar political fires burning all over the world,” wrote Cameron Bailey, the artistic director and co-head of the Toronto International Film Festival.