All India Majlis-e-Ittehadul Muslimeen (AIMIM) Chief Asaduddin Owaisi has blamed right-wing groups under Rashtriya Swayamsevak Sangh, the ideological mentor of the BJP, for the hate crimes in the country. The Prime Minister, he said, is speaking against such attacks, but he has not been able to stop it, NDTV reported.

“People are being beaten up if they do not raise slogans of JSR (Jai Shri Ram) and VM (Vande Mataram). Such incidents aren’t going to stop. Only Muslims and Dalits are being targeted,” he said on Sunday. “There are organisations behind such incidents and all of them are linked to Sangh Parivar,” he said.

Mr Owaisi’s remark comes days after 24-year-old Tabrez Ansari, a Muslim man in Jharkhand died after an attack by a mob.

On Saturday, Owaisi had called lynching incidents “politically motivated, communal hate crimes”. “To oppose them and ask justice for the victims’ families isn’t what makes it political,” he said in a tweet. “Not speaking against them or calling them ‘misunderstandings’ or ‘mistakes’ is mala fide and encourages the mob to continue its ‘good work’.” 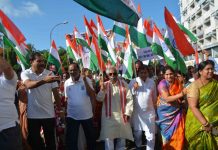 Dressed as a Cattle Herder, TDP MP Protests Outside Parliament