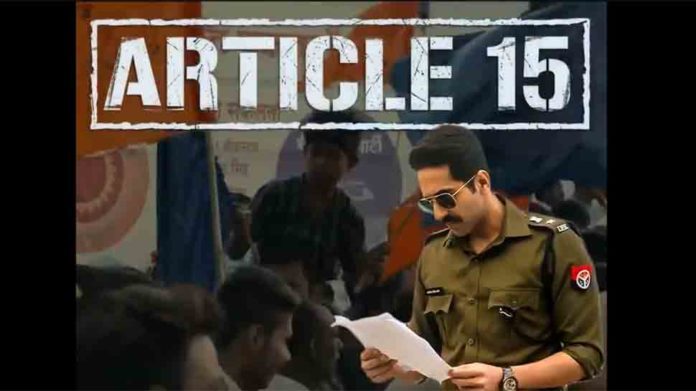 The movie Article 15 starring Ayushman Khurana, Manoj Pahwa, Kumud Mishra, Mohammed Zeeshan Ayyub, and Syanai Gupta among others and directed by Anubhav Sinha has been making news just after its trailer was released on 30th May.

Taking its name from Article 15 of the Indian Constitution, the movie is based on the theme of the widely prevalent caste-based discrimination in Indian society. The theme of the movie- on the basis of its trailer- has been criticized by people on the opposite spectrum of political ideology. The Ambedkarite intellectuals have criticized- and rightly so- the movie for showing yet another so-called Upper Caste savior of Dalits, while the reactionary brahminical and casteist groups have criticized the movie for portraying upper castes, specifically Brahmins and Kashrtiyas in a bad light and have even violently disturbed the screening of the movie at various places.

The criticisms levelled by Ambedkarite intellectuals and groups are totally justified as far as the portrayal of ‘upper caste’ saviour is concerned and also as far as the caste-based demography of Bollywood is concerned. However, in complete agreement with Ambedkarite groups and intellectuals, I would like to present a slightly different understanding of the movie. Even though the movie will not have any radicle impact on widely prevalent caste-based discrimination, often committed by those in the upper hierarchy of the caste system, this movie has the potential of at least staring a dialogue, a conversation and a bit of self- reflection among the upper caste audience.

The movie starts with the famous protest song ‘Kahab ta lag jayi dhak se’ and ‘Blowing in the wind’ by Bob Dylan. The main protagonist of the movie is upper caste, UK returned IPS officer, often in conversation with his ‘activist’ wife, who keeps publishing on issues of gender, human rights, and equality. He has been posted in a remote village after he annoyed his senior whose last name is ‘Shastri’.

For him, remote India or ‘Bharat’ is like a different world altogether, which he can relate with the India of the 1980s as shown in the movies. Being educated in St. Stephens and later Europe, he is caste blind to the extent that he is ‘unaware’ of his caste and its operation until his activist wife remained him how his mother used separate utensils for housemaid/s and his assistant places him in the hierarchy of caste.

Falling in the social realism genre of cinema and art, the theme of the movie is basically a mix of various caste-related violence and discrimination revolving around the infamous 2014 Badaun case. The makers of the movie have situated the movie in the timeline from 2014-2019, i.e. the first term of Modi Government and basically have tried to touch upon all reports of caste-based discrimination with made ‘news’ in the mentioned timeline.  From Una Lynchings to manual scavenging to Dalit food tourism and everyday slurs of being from the ‘Quota’, from midday meals being thrown away because it was cooked by so-called lower caste, to caste-based discrimination in educational institutions, the movie tries to impress upon -with help of some brilliant cinematography and music- its audience the reality of caste-based discrimination and violence as experienced in different areas of our society by a large section of Indian populace.

One character of the movie ‘Nishad’, played by Mohammed Zeeshan Ayyub, is basically a combo of three Dalit icons who emerged in last few years, namely the late scholar Rohith Vemula, Chandrashekhar Azad Ravaan, and Jignesh Mevani and represents their struggles.

This movie also talks about the Political-Executive- Criminal nexus which has a very presence in Indian society and common people encounter on a regular basis.  The movie also tries to explicate the nature of caste and how it actually operates in the ground, as the movie breaks the often employed monolith category of Dalit and OBC to represent 70 % of the Indian population. The police constable Jatav- played by Kumud Mishra- falls in upper strata of caste hierarchy as compared to Pasis. The Jaats in Uttar Pradesh are now OBC, but Jaats of Haryana fall in general category. Even the Brahmin as caste is not a homogeneous category, with the protagonist being lower in the hierarchy as compared to the pontiff. The movie also shows how so-called lower caste people are just rendered “invisible” and are referred as anonymous beings with some predefined and crystallized “nature”, who cannot be trusted and should not be taken seriously often defined through the colloquial epithet “ye log aise hi hote hain”.

This movie is also a critique of the contemporary socio-political climate in the country- specifically of the Hindutva narrative and how it deals with the issue of caste and its attempt to create opposing binary on the basis of religion. It also tries to uphold the Indian constitution and advocates fighting/resisting though due process and shows how state institutions like the CBI have become a ‘caged parrot’. There are few sequences in the movie which powerful and have will have long lasting impact like the very humane portrayal of the radical opponent ‘Nishad’. All his dreams of living a normal life- of bringing flowers for his beloved, hanging out with his friends, etc. – are destroyed because of the persisting caste discrimination, and then there is a caste conscious so called lower caste jatav, who slaps a caste conscious so called upper caste ‘khsatriya’.  The slap is basically a symbolic resentment of thousands of years of oppression.

The recent cases of suicide by students belonging to Dalit community, the manifold increase in caste-based violence particularly in last five years; the growing attack on reservation system both by government and its supporters have clearly shown how prevalent and institutionalized the caste-based discrimination often translating into caste blindness has become in Indian society. In this scenario where caste consciousness has strengthened in upper caste, a movie like  Article 15 has potential to at least recognize how caste actually works and in fact is entrenched in our institutions and society.

Just like literature, Cinema is a reflection of any society, and it can shape its aspirations and ideals. Any piece of art, be it cinema, or theater, or literature or painting, apart from being a source of entertainment and leisure, also has another important function. They have this potential to affect and change and initiate a dialogue both with society and oneself.  This function is dependent on the interpretation of the art, which in turn is dependent on the psychological and ideological makeup of the audience.

A movie like Article 15- with its obvious drawback of portraying upper caste saviours from top to bottom- has the potential to perform this important function in a society where the matters of social justice are increasingly been seen as a part of appeasement politics instead of rights.

Harshvardhan is a research scholar at JNU

Disclaimer: The opinions expressed in this article are the author’s own and do not reflect the view of the website.