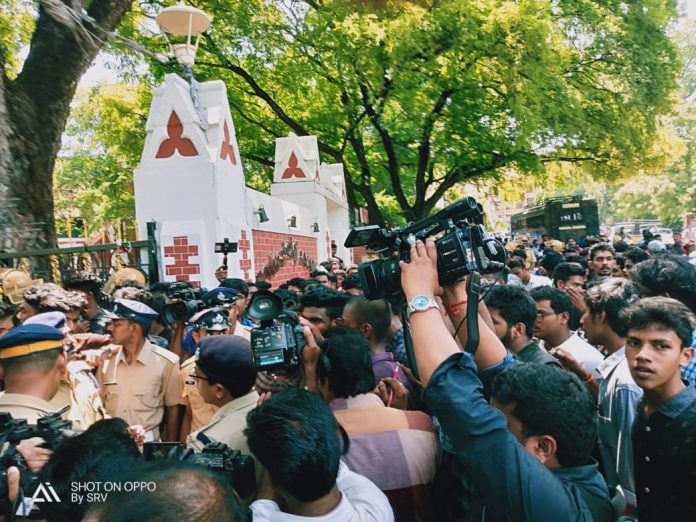 Akhil Chandran, a third-year undergraduate student was stabbed in a clash at University College, Trivandrum on Friday. He has been admitted to Medical college hospital and has sustained two stab injuries. Currently, his condition is satisfactory, said hospital officials. Assailants have not been identified yet.

The issues began in an apparent conflict that began after a few students sung a song in the canteen. Following the clash, the student groups were called for a mediation talk. However, a dispute erupted in between the conversation and Akhil was stabbed.

Students alleged that attackers were from SFI. Following the incident, university college turned turbulent with students jointly protesting against SFI.

“I am from SFI but I have disagreements as to how they run in this institution. I was a part of the protests that happened today. Police have promised to arrest the perpetrators soon,” said a third-year student from the college.

However, college authorities have not yet responded about the incident. Following the instructions of principal and union leaders, media was forcefully moved out of the campus.

Responding to TWJ, SFI All India President V.P Sanu said, “Such an incident shouldn’t have happened at the first place. The unit committee of SFI clearly failed to stop the issue from becoming a bigger problem. In that scenario, we have decided to dismiss the unit committee of college for now. Actions will be taken from the side of the party against the assailants after a thorough review of the case.”

The student’s party of this college had earlier been complained of perpetuating violence. Last month, a student had attempted suicide following a threat from SFI.

In February 2017, an unprovoked assault took place when three students who had come to the college campus to watch a theatre play were beaten up and moral policed by SFI.