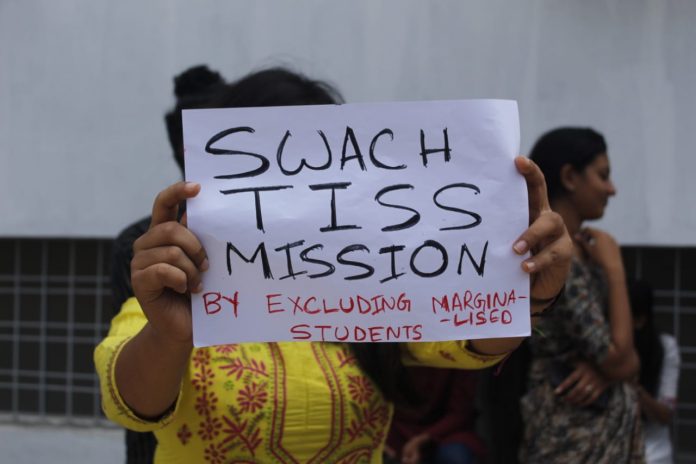 The strike of TISS-Hyderabad students entered a seventh day, as the administration failed to accept the charter of demands. Intensifying the stir, the students had launched a hunger strike on Friday expressing their dissent on the hostel fee-structure and protesting the impassive attitude of the administration.

TISS had recently shifted its campus from Telangana State Institute of Panchayat Raj and Rural Development (TSIPARD) Campus in Rajendranagar to Turkayamjal, which is located in the outskirts of Hyderabad city.

Following the shift, the tender to the hostel was given to a private party, CN Reddy. CN Reddy also is the owner of the KB School of Excellence, which is now TISS Hyderabad’s new campus.

While they were earlier allowed to pay hostel fees of Rs.15,000 in three installments over the course of the semester, GoI PMS students could pay the dining charges once their scholarships were received. However, the present fee structure under the new service provider, CN Reddy, requires all students eligible for scholarships to pay semester fees of more than Rs.52,000 upfront.

“There were 4 students with Government of India – Post Matric Scholarship who found it difficult to pay the entire fee amount together. We had requested the administration to provide them with accommodation for a few days so that they can pay the amount as they avail the scholarship amount. However the admin didn’t heed to our request,” said one of the students to The Woke Journal.

The students are also not satisfied with the security on campus and the quality of food being provided. Four students were reportedly admitted to hospital due to food poisoning and around 20 of them have fallen ill.

“The current arrangements of the hostel with the students expected to pay an upfront amount of Rs.54,650 when they join college is extremely exclusionary for the SC/ST/OBC-NC students who come from very marginalized backgrounds. The extremely high hostel fee and the difficulty in arranging accommodations outside have pushed students on the verge of dropping out from their respective courses and makes the college reserved for students from privileged backgrounds,” says a press statement issued by  Student Action Committee.

The various demands put forth by the students are:

Following the apathetic attitude of the administration, the students started a mass hunger strike on Friday until their demands are accepted. Three students were taken to the hospital due to deteriorating health.

“The students on hunger strike, after the meeting, called out the callousness of the admin regarding the cases of hospitalisation but they did not take any accountability as usual. All questions regarding the illegality of the contract and the disregard for the institute’s diversity while settling for a private vendor were dismissed.” says the press release. 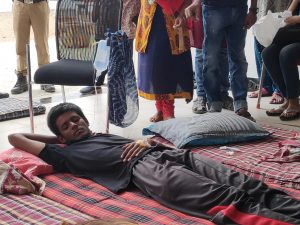 “It was revealed that there is no official contract for the hostel as of now. Not just that, the finalisation of the informal contract was done over a phone call. We were told that after considering 3 models they found the one with C.N. Reddy most feasible. They also admitted to the fact that the rent in this area otherwise ranges between 4-6k and that they agreed to the current tariff as they could not guarantee Reddy 400 students for the hostels,” it adds.

They also informed that the strike will continue on until an appropriate and acceptable resolution is reached.

Support poured in from various corners on the issue.

“TISS Administration has constantly been creating chaos in its campuses with its Anti-student measures. The fee hike is one of the most important reasons for the recent protests and hence the same should be revoked. This is not the first time the TISS administration is resorting to anti-student measures and this should be seen only as an extension of last year protests in TISS,” responded Ambedkar Students Association.

“The Central Executive Committee of SFI stands in solidarity with the ongoing protest in TISS Hyderabad called by Students action committee raising the issues of new fee structure and hostel facilities. It is a matter of concern that the students in various campuses of TISS are left with no consideration by the administration but to opt regular protests even for their basic rights,” responded SFI.

The administration responded that despite the various efforts made by the admin, the students went on with illegal, unlawful and unjustified activities and disturbances and have asked the students to vacate the campus immediately. They have suspended the academic activities until further notice.

Students informed that they will be going for legal action against the service provider and that the strike will continue until demands are met.