It is Microsoft founder Bill Gates who has topped the World’s Most Admired 2019 list. He is followed by former US President Barack Obama and actor Jackie Chan.

Prime Minister Narendra Modi has beaten the likes of Amitabh Bachchan, Shah Rukh Khan, and Salman Khan to earn the sixth spot in World’s Most Admired 2019 list. Big B is on the 12th position (three spots down from last year) and Shah Rukh is on 16th, followed by Salman, who ranks at 18th position in the men’s category, reported India Today.

Michelle Obama has topped the list of World’s Most Admired Women 2019. She has replaced Angelina Jolie, who is now in the third position. Second place bagged by Oprah Winfrey. Malala Yousafzai is in the sixth position.

In the women’s category, Deepika Padukone has earned herself the 13th position. While Priyanka Chopra is on the 14th position followed by Aishwarya Rai Bachchan and Sushmita Sen at 16th and 17th spot respectively, reported India Today.

The list has been compiled by YouGov- an international market research and data analysis company. 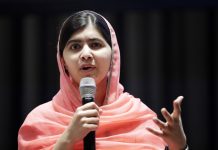