Responding to The Woke Journal, Athanasius college principal, Mathew K said that the magazine didn’t match up with the standards of a college magazine and had ‘provocative’ content. The college issued a circular withdrawing the magazine as it doesn’t fit with the ideology and perspective of the college.

The magazine was released by actress Archana Padmini, of Women in Cinema Collective (WCC) four months back. Following the withdrawal, Archana wrote, “Congrats to this young, sensible, editorial team for disturbing the communalists. I condemn the situation.” 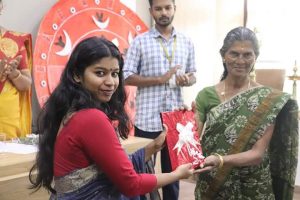 While the college cancelled the magazine, the editorial team made the magazine pdf public demanding people to read it.

“The college might have withdrawn the magazine. But we can’t back off. What we hold on to in the magazine was gender equality and constitution. We are sure that it doesn’t carry any content that is provocative. We have published the pdf of the magazine online. Let people read and find for themselves,” said one student from the editorial board to The Woke Journal.

Hindu Aikyavedi Leader K.P Sasikala known for her extremist statements accused that the magazine was a deliberate attempt of a Christian management college to hurt Hindu religious sentiments.

“As soon as we received complaints we had set up a review committee to look into the issue. On our inspection, we found that the magazine had not met the standards of a college magazine and also it had contents that were provocative. The content doesn’t fit our culture. Hence, we decided to withdraw it,” added the Principal.

The article that had become controversial is titled ‘Sabarimala Vidhi Thurannidunnathu’ written by the editorial board member and which had discussed how the apex court verdict has led to a debate on constitutional values.

Oldies of a Feather Stick Together