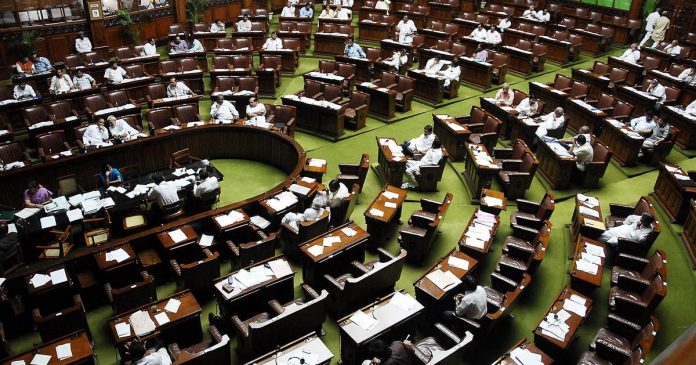 Opposition party leaders created a ruckus in the Lok Sabha on Thursday, alleging that the NDA government had introduced bills without informing them in advance.  Sugata Roy, an MP of Trinamool Congress, alleged that the government was not giving the opposition time to look into detail, the key bills.

“This House cannot function on the government’s whims and fancies,” Roy said. Another TMC MP reportedly said the Opposition was questioning the government’s “whimsical and arbitrary exercise” of power.

Trivandrum MP and Congress leader Shashi Tharoor cited the Lok Sabha handbook and said that the government shall give notice at least two days before its introduction. Such instances which were an exception has now become a norm, complained DMK MP Kanimozhi.

Speaker Om Birla, in response, promised to personally ensure that all MPs are informed a day in advance before new bills are listed.

Lok Sabha Speaker Om Birla: Since I was chosen to be the Speaker it's my responsibility to see that I run House with consensus of all MPs…As you requested,I'll see to it personally that before a Bill is listed all MPs are informed about it a day in advance so you prepare for it pic.twitter.com/7hWkXzSSut

“Since I was chosen to be the Speaker it’s my responsibility to see that I run House with the consensus of all MPs,” he said.  “As you requested, I’ll see to it personally that before a Bill is listed all MPs are informed about it a day in advance so you prepare for it.”

On Wednesday, Trinamool Congress MP Derek O’Brien attacked the government and said Parliament was supposed to scrutinise bills. “Are we delivering pizzas or passing legislation,” he had asked.

His tweet had accompanied a chart showing the “bulldozing” in the ongoing session. The chart showed the number of bills that were sent to parliamentary panels for scrutiny since 2004.

As many as 60% of the bills were sent for scrutiny during the 14th Lok Sabha and 71% in the 15th Lok Sabha, but this dropped to 26% between 2014 and 2019, when the Bharatiya Janata Party has been in power, the chart showed. The 17th Lok Sabha has passed 18 bills, but only one of them was sent for scrutiny, according to the chart.