Former foreign minister Sushma Swaraj passed away a while ago at AIIMS on Tuesday. The BJP veteran, who suffered a massive heart attack, died at the age of 67. She was one of the senior-most BJP leaders.

Sushma Swaraj had been the Union Minister of Foreign Affairs in the Modi government from 2014-2019. Her last Twitter post thanked Prime Minister Narendra Modi for the government’s move on Kashmir stating that she was waiting for this day in her lifetime.

She did not contest the recently held Lok Sabha elections in which the party won a massive majority. She suffered a heart attack on Tuesday and died at age 67 after being admitted to AIIMS in an emergency on Tuesday, Aug 6th.

Abhishek Singhvi, the national spokesperson for Congress party, tweeted that he was deeply saddened by the tragic news.

shocked and deeply saddened by this tragic news re #SushmaSwaraj My sincerest condolences. Knew her from SC days, as highly cultured attendee at my wife’s ghazal & sufi recitals, most graceful, powerful orator, warm & helpful. Very soft & considerate yet committed to causes

Sushama Swaraj was known for her unmatched oratory skills and had contested against Sonia Gandhi earlier. 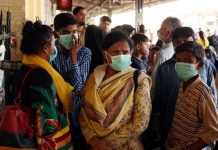 Diplomacy to Resolve Rohingya Crisis is on: B’desh