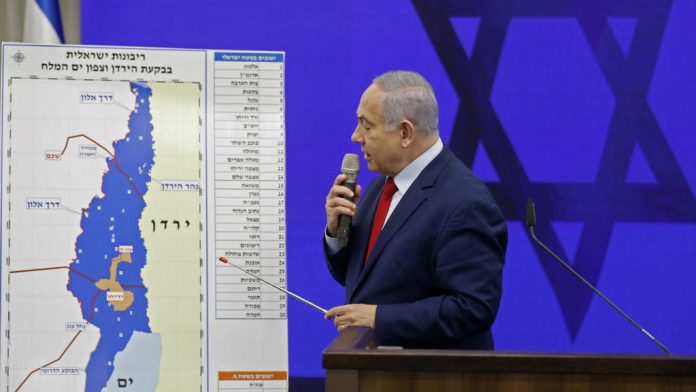 A statement by Iraqi Foreign Ministry’s spokesman Ahmed al-Sahaf said that his country’s rejection of Netanyahu’s intention to annex Jordan Valley and the north of Dead Sea has prompted a wave of outrage in the Arab, Islamic and international areas.

Iraq treats Netanyahu’s announcement as “aggressive electoral propaganda and programmed racist settlement policy, based on the deprivation of the rights of the Palestinian people”, Al-Sahaf was quoted as saying by Xinhua news agency.

“It is a very dangerous occupation step towards Palestine, which comes to fuel the conflict in the whole region,” Al-Sahaf said, adding that such announcement has to be encountered with an Arab and international reaction.

Iraq also confirmed that it is important “to provide international protection to the Palestinian people and the Palestinian territories and to exert a genuine, practical and responsible effort at all levels to address the actions of the Zionist entity (Israel), which deliberately violates international law”.

On Tuesday, Netanyahu pledged to annex a key part of the occupied West Bank if re-elected in next week’s election. Israel occupied the West Bank in the 1967 war and also seized part of the Golan Heights from Syria.

Is liberal democracy under threat?

UK indicates it may “clarify” new Brexit offer to EU