Pakistan Prime Minister Imran Khan on Thursday left for a two-day official visit to Saudi Arabia, ahead of his trip to the US for the 74th Session of the UN General Assembly, an official statement said.

Khan has been in “regular contact” with Saudi Crown Prince Mohammed bin Salman over the Kashmir issue, Dawn news quoted the PMO statement as saying.

The Prime Minister has had called the Crown Prince earlier this month to brief him over the situation in the region.

Khan will also bring up the matter in his speech at the UN General Assembly next week.

As a result of his phone calls to Crown Princes of the United Arab Emirates and Saudi Arabia, the Foreign Ministers of both countries visited Islamabad.

The leadership of both countries will also discuss ways to strengthen economic ties between Pakistan and Saudi Arabia, during the visit, the PMO statement added. 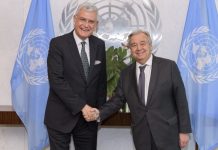 Plastic ban to be strictly implemented in Kerala