CPI-M General Secretary Sitaram Yechury on Friday hit out at the Narendra Modi government’s economic policies and termed its decision to invest money from the state-owned Life Insurance Corporation (LIC) to bail out loss-making public sector companies as “another pathway to loot people”.

In a series of tweets, Yechury said: “LIC has lost a whopping Rs 57K crore in the stock market. By compelling LIC to use people’s savings invested with trust to bailout corporates by buying their shares, this RSS government has opened another pathway to loot people.”

The Communist Party of India-Marxist leader also hit out at the government’s announcement on Friday to cut corporate tax to fuel investment in the manufacturing sector. Though Prime Minister Narendra Modi termed the slashing of corporate tax — which would result in an annual loss of Rs 1,45,000 crore to the exchequer — as “historic”, Yechury called it “crony capitalism at its worst”.

“The money snatched from the RBI, Rs 1.76 lakh crore has finally been transferred to corporates by the Modi government, giving them Rs 1.45 lakh crore upfront. This is a scandal,” he said. “This will not help DEMAND. Friendly cronies get a bonanza, but no extra money in the hands of people. Rural wages have fallen under this government and MNREGA wages are stagnant, new wage code wants to squeeze workers more,” he added.

“When we needed more money in the hands of the people to stimulate demand, the government has handed it to corporates instead. This is crony capitalism at its worst,” Yechury said.

The CPI-M leader linked the tax cut announcement to Modi’s ‘Howdy Modi’ event in Houston on Sunday. “Announcement timed for the proposed spectacle of ‘Howdy Modi’ in the US? Massive concessions to foreign speculators. India is going through its worst phase after independence and all we are getting is a callous government and circuses,” he wrote.

Congress General Secretary Priyanka Gandhi also referred to media reports about LIC losing Rs 57,000 crore. “LIC is another name for trust in India. Common people invest their hard-earned money in LIC for future security, but the BJP government is investing LIC money in loss-making companies, shattering their trust,” she tweeted. 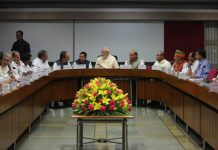