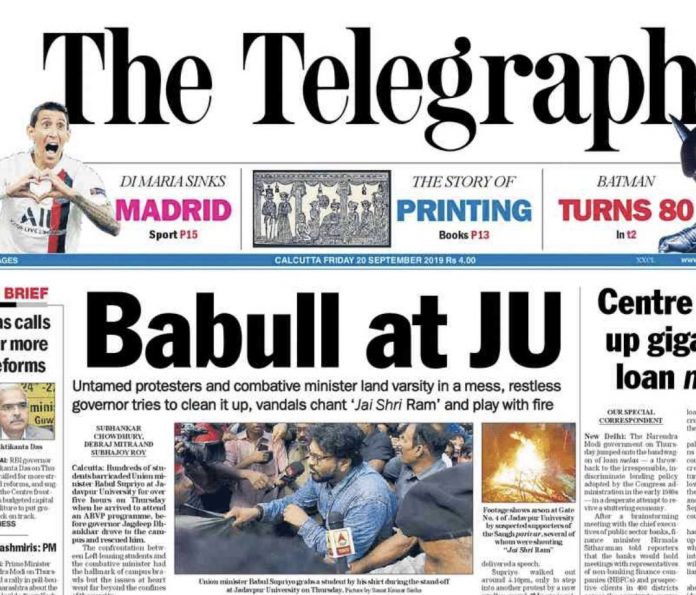 Jadavpur is in trouble since Thursday, as protesting university students resorted to violence. Union Minister Babul Supriyo, who had reached the campus to address an ABVP seminar was heckled, slapped and detained for hours by the students.

In retaliation, the student activists belonging to ABVP committed arson and smashed furniture and computers. A blame game has taken the centre stage with BJP accusing the Mamata government and students of ABVP hooliganism.

Here is what transpired in the university:

Union minister Babul Supriyo had reached Jadavpur university to attend a seminar organised by ABVP. He was shown black flags by students of left organisations who did not want the minister, known for his extremist statements to enter their campus.

The protesters accused Supriyo of insulting and threatening students. “He insulted the students and abused our women classmates. He showed rude hand gestures and threatened us with dire consequences. We will not let him leave unless he tenders an apology,” said a student.

The protest came to a halt only after the students were persuaded by the staff and police. The minister left along with the governor in his car.

However, a group of agitated ABVP activists took the issue further by retaliating. The room of Arts Faculty Students Union (AFSU) was vandalised. The group which shouted out slogans like ‘Jai Shree Ram’ and ‘Bharat Mata ki Jai’, were seen to be burning furniture, computers and ceiling fans of the room and covering the signage outside it with black colour.

Why didn’t you receive me, Supriyo to VC

VC Suranjan Das was asked as to why he wasn’t present on time to receive Supriyo.

“Apart from being a politician, I have a separate identity. I am an elected representative, a Union Minister. Why didn’t you receive me,” he asked Das.

“I was not invited,” the V-C replied.

“I was invited to your campus. You should have been there. For people like you, there is anarchy in West Bengal. I am sure you are a Leftist,” Supriyo said.

“A central minister is coming to your campus. You wanted this to happen,” he added.

Following the agitation, Supriyo had asked the VC to call the police. The VC, however, refused citing the police violence on JU students, back in 2014.

Meanwhile, the minister shared the image of agitation on Twitter and wrote, ” We shall rehabilitate you ‘mentally’ so that you & your Hooligan Friends (all footages available with the media) behave like you are supposed to behave as students.”

These cowards will not be allowed to malign & tarnish the image of #JadavpurUniversity .. U shall be found out by us soon but don’t worry, you shall not be treated in the manner you treated me .. (1/2)@BJP4Bengal @BJYM @ABVPVoice @BJPLive pic.twitter.com/yRu8O35d1t

He described the students who raised a protest against him as “cowards and hooligans.”

He also wondered if the Mamata government would punish the perpetrators of the violence.

“This is the guy who led the assault in #JadavpurUniversity .. we will find him out and then see what @MamataOfficial does to him in terms of charging him for assault without ANY PROVOCATION whatsoever from our/my side,” he tweeted.

Meanwhile, West Bengal governor took a dig on the Mamata administration which had accused of him being partisan.

“The issue of serious lapses by the University VC, including virtual abandonment of his obligations, and the apparent failure of the State Police Administration in attending to the situations appropriately and inadequate security arrangements for the Governor/Chancellor during his visit are receiving his attention for way forward steps,” his letter said.

“Why is CM silent? A central minister, a prominent singer gets assaulted and yet administration keeps mum?,” he asked. “TMC government was sitting idle, waiting for Babul Supriyo to get killed,” he added.

Dilip Gosh also said that the university shall be destructed in a surgical strike.

“They are like the terrorists whose camps we destroyed in Pakistan [during Balakot strikes],” Ghosh threatened. “We will destroy these groups inside the university as well.”

R Rajagopal, the editor of The Telegraph, on Sunday accused Union minister Babul Supriyo of using expletives in a phone conversation about the newspaper’s reporting of the violence at Jadavpur University on Thursday.

The arrogant editor of ?@ttindia? asks me to explain what makes me ASSUME that they meant me when they print BabulL over my pix!! Hw obnoxious can one get•It is surely a paper that is SOLD to #TMchhi & Mamta’s ADs to them•Shame on them& he threats me with an article tmrw pic.twitter.com/kFAKSO7HBX

Rajagopal claimed that he had asked the minister to follow “established processes” and send a letter or a legal notice if he had complaints.