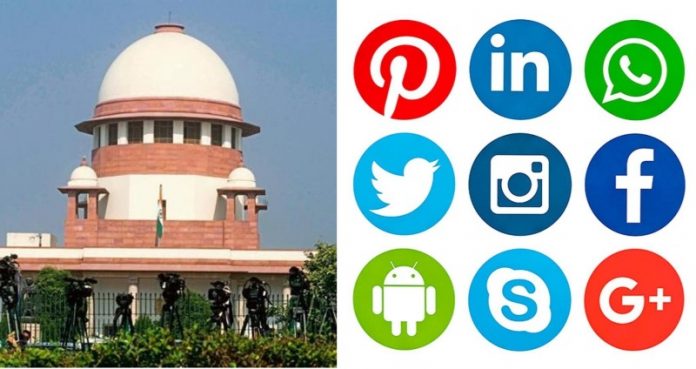 Expressing its concerns over issues like trolling, character assassination, spreading lies and fake news, the Supreme Court on Tuesday emphasised that social media should be regulated.

The observation by a bench headed by Justice Deepak Gupta came while asking the Centre to file an affidavit within three weeks detailing the timeline when the draft rules framed for regulating social media could be finalised.

During the hearing, the top court made a critical comment on the misuse of social media and said: “Why should someone be able to troll me and spread lies about my character online.”

The top court recommended the government to look into these issues.

Suggesting strict guidelines to regulate the social media, the top court said that statutory guidelines should balance online privacy, state sovereignty and the reputation of an individual.

The top court said that the Union government should frame guidelines for the intermediaries — Facebook and WhatsApp — to provide information for offending posts keeping in mind that privacy of the individual should not be invaded.

Observing the misuse of social media, Justice Deepak Gupta said: “It is dangerous how some of these technologies work. With a little help, I could have purchased an AK 47 on the Dark Web in just five minutes.”

Justice Gupta expressed that earlier he was happy in his blissful ignorance of the social media, but now he is worried and said: “I am thinking to leave my smart phone and get back to basic phone.”

Senior Advocate Kapil Sibal, appearing for Whatsapp said that it is a wise decision.

Solicitor General Tushar Mehta said some of them have already started this practice.

The top court was hearing Facebook plea seeking transfer of various petitions from different High Courts to the top court.

Facebook has said that the transfer of cases would serve the interests of justice by avoiding the possibility of conflicting decisions from the High Courts.

Facebook told the apex court that two petitions had been filed in the Madras High Court and one each in the Bombay and Madhya Pradesh High Courts.

All the pleas in the three High Courts have sought a declaration that Aadhaar or any other government-authorised identity proof should be made mandatory to authenticate social media accounts.