National Commission for Minorities Vice Chairman George Kurian has raised an alarm over Christian girls in Kerala becoming soft targets for Islamist radicals involved in terror activities and has sought a National Investigation Agency (NIA) probe into the matter.

In a letter to the Union Ministry of Home Affairs (MHA), he has demanded that the Centre bring a strict law to deal with the organised conversions and also warned that if not checked this could lead to communal disharmony in the state.

Warning the government over the issue, Kurian wrote in the letter dated September 23: “The spate of the organised religious conversions and using the victims for terror activities by trapping them through ‘love jihad’ has shown that Christian community is a soft target for the Islamic radicals.”

“The issue is serious as it could lead to communal disharmony in the state. It was found that in most cases, the victims were brainwashed and in some cases, they were used as couriers for terror activities,” Kurian said, adding that many times the victims’ families refused to come out and report the issue fearing threat.

“It is important that the MHA takes note of this alarming trend and order a probe by the NIA and bring in an effective law to curb such fraudulent activities of radicalised elements,” he said.

He apprised the MHA that the National Commission for Minorities was in receipt of complaints from two Christian families of Kerala.

Citing the examples, Kurian said, “One incident took place in Kerala’s Kozhikode, where a Christian college student was allegedly raped after her juice drink was laced with sedatives. The act was also filmed to blackmail the victim to get her to convert to Islam and when she refused an attempt was made to abduct her from the hostel she was residing in.”

The second case was that of a Malayali Christian girl studying in Delhi. Kurian said that she was abducted to a West Asian country by one Mohammad Siddiqui. He said that the girl’s parents in their complaint expressed the fear that the girl could have been misled or cheated or brainwashed or abducted and led astray to nefarious activities like joining an outfit such as Islamic State or being used as a slave.

Kurian pointed out that the fears expressed by the parents were not misplaced, given the experiences in similar earlier cases.

Kurian also referred to the case of 21 people escaping from Kerala and joining the Islamic State terror group in 2016. He also pointed out that of the 21 people, five were converted from Christianity. He said that the Kerala Catholic Bishops Conference’s (KCBC) Commission for Social Harmony and Vigilance had also launched a campaign against this.

Kurian has referred to the KCBC’s publication — Jagratha — where it stated that it was shocking that around 4,000 girls have been subjected to religious conversion since 2005 (till 2012) after they fell in love. It also stated that the victims were sexually harassed and forced to spend the rest of their lives in a pathetic condition without any freedom. 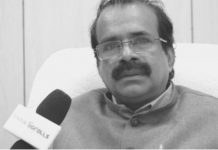 Give strong message to China, stop kneeling down, says Priyanka