After being taken to task by the Supreme Court earlier this week in the Kochi Maradu demolition case, Kerala Chief Secretary Tom Jose on Wednesday submitted a plan of action to the state cabinet to raze the complex.

Jose informed the state cabinet about the seriousness of the top court regarding the case and is said to have said that there is no other way but to abide by its orders.

The apex court had set a deadline of September 20 to demolish the flats, which had been built in violation of the Coastal Regulation Zone (CRZ) rules. The Maradu complex comprises of 356 flats in five buildings and is housing 240 families.

The Kerala government, however, delayed the follow-up action and the Supreme Court on Monday pulled up the Chief Secretary for not complying with its orders.

The proposed plan of action that Jose unveiled before the cabinet will now be presented before the Supreme Court on Friday. Kochi sub-collector S.K. Singh has been appointed as a special officer to oversee the demolition to be completed within three months.

As the first step, directions will soon be given to the Kerala State Electricity Board, Kerala Water Authority and various cooking gas companies to see that power, water and gas connections to these flats are snapped.

Steps have also been taken by the Maradu Municipality to decide on some professional companies, which have experience in razing buildings and causing the least environmental issues at the time.

The Chief Secretary’s report also said that it has been decided to register criminal cases against the builders.

Meanwhile, the residents have decided not to vacate the premises at any cost and to continue fighting against the demolition order. 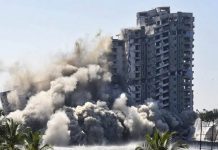 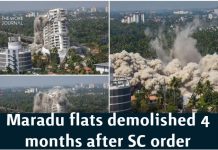