Spider-Man might be swinging his way out of the Marvel Cinematic Universe, but the world of the web-slinging is expanding with a new spin-off movie “Madame Web”.

Sony Pictures is developing a movie based on the “Spider-Man” character Madame Web, reports hollywoodreporter.com.

Screenwriters Matt Sazama and Burk Sharpless are on board to pen a script. The duo is behind “Morbius” — Jared Leto’s “Spider-Man” spinoff about a living vampire.

Sony’s executive Palak Patel is overseeing the project. The studio has not official communicated about the movie.

Introduced in 1980’s “The Amazing Spider-Man No. 210”, Madame Web is a mutant who specialises in predicting the future specifically of Spider-themed superheroes. She has mentored not only Peter Parker’s alter ego, but also multiple generations of heroes calling themselves Spider-Woman.

According to her bio, she is a mutant who has been blind her entire life and has a rare neuromuscular condition that hinders her ability to move. That’s why she is attached to an apparatus to help her function (created by her husband), it gives her the appearance of having a web. She is a powerful psychic medium who also possess the gift of telepathy.

Though in the comics, Madame Web has been an elderly woman, there were occasions where she was able to reverse her age.

Sony has the film rights to both “Spider-Man” and numerous characters connected to him. In addition to “Morbius”, which opens on July 31, 2020, the studio has “Venom 2” and multiple “Spider-Man: Into the Spider-Verse” follow-ups in the works.

The news of “Madame Web” comes weeks after the studio had a high-profile split with Marvel Studios over use of “Spider-Man” in Marvel Cinematic Universe films. “Spider-Man: Far From Home”, the most recent film to star Tom Holland as the superhero, is Sony’s highest-grossing movie ever with more than $1.12 billion globally. 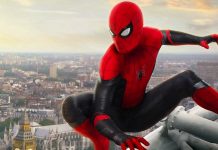