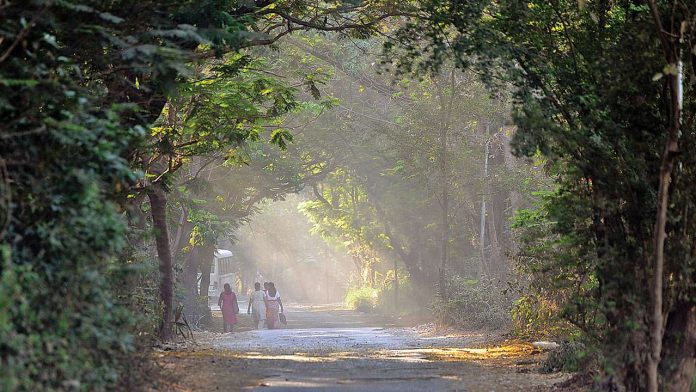 Mumbai Police on Saturday clamped prohibitory order and detained over 75 environmental activists when they protested the cutting of trees in the Aarey Colony to clear the way for building a car-shed for Mumbai Metro-3, officials said.

Among those whisked off was Shiv Sena leader Priyanka Chaturvedi, while Aditya Thackeray condemned the tree felling taken up since late Friday night.

“A project that should be executed with pride, the Metro-3, has to do it in the cover of the night, with shame, slyness and heavy cop cover. The project supported to get Mumbai clean air is hacking down a forest with a leopard, rusty-spotted cat and more,” Aditya Thackeray tweeted.

Maharashtra Congress spokesperson Sachin Sawant, slamming the Shiv Sena, tweeted in Marathi: “This is the time @ShivSena. You are in the government, you can stop this. The Mahayuti (mega alliance) is more important or the mega loss of trees?”

Mumbai Police have put up roadblocks at the entry points to Aarey Colony in Marol-Maroshi, Powai and Goregaon suburbs of north-west Mumbai.

Aam Aadmi Party national joint-secretary Ruben Mascarenhas said that many people including himself were detained and later released. But many tribal women are still detained at different police stations, he said.

Activists claimed that over 400 trees have already been cut off in the past 12 hours after the Bombay High Court dismissed all petitions challenging the felling of 2,646 trees.

A division bench of Chief Justice Pradeep Nandrajog and Justice Bharati Dongre also declined to declare Aarey Colony as a ‘forest’ or quash the BrihanMumbai Municipal Corporation (BMC) Tree Authority’s decision permitting the razing of the trees in the green zone for the metro project.

The judges noted that the carbon dioxide sequestration of 2,702 trees for their entire lifetime calculated at 12,79,062 kg would be compensated in 3,948 fully-loaded trips of the metro trains while dismissing petitions filed by activist Zoru Bhathena and Shiv Sena corporator Yashwant K. Jadhav.

Jadhav was also ordered to pay a fine of Rs 50,000 for his petition against the approval granted by the BMC Tree Authority of which he is a member, while Bhathena is moving the Supreme Court in the matter.