A no-deal Brexit, even in a “relatively benign scenario” may push the UK’s debt to its highest levels since the late 1960s, according to an analysis by the Institute for Fiscal Studies (IFS).

The think-tank estimated the UK’s debt could rise to 100 billion pounds, bringing the country’s total debt close to 90 per cent of GDP for the first time in more than 50 years, reports Efe news.

The UK – with a current debt of around 85.3 per cent of GDP – plans to leave the European Union (EU) on October 31, with Prime Minister Boris Johnson determined to exit on this date even if no deal was reached.

IFS Director Paul Johnson pointed out that there is an “extraordinary level of uncertainty” and the country’s economy and public finances face many risks in the wake of Brexit.

The IFS said that a no-deal Brexit could temporarily halt all economic growth for two years, even with “substantial” government spending.

The think-tank projected that an increase in public spending in 2020 may be followed by an economic downturn as the government would have to face the consequences of a smaller economy with a larger debt.

Johnson said that it would be “crucial” for government spending programmes to be temporary, while experts have pointed out that the British economy has already reduced by around 60 billion pounds since the country voted to exit the EU on June 2016.

On October 4 a set of documents submitted to a Scottish court revealed that the UK would seek an extension if no deal was reached. 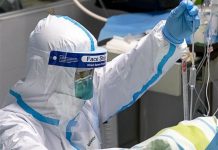