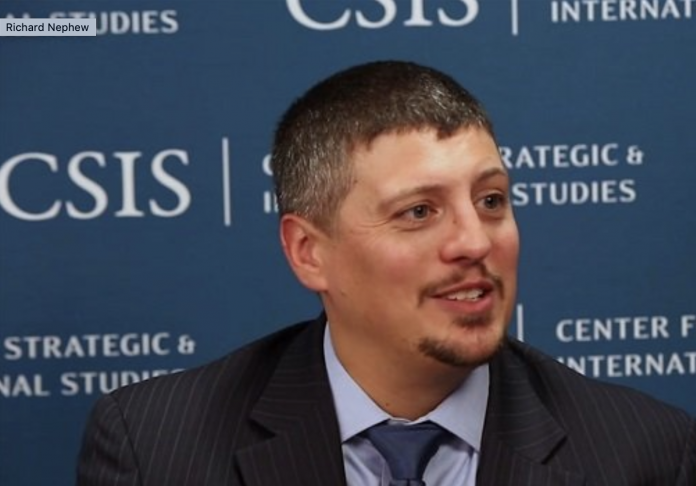 Chinese and US trade representatives at the highest levels of government are readying to meet in Washington DC on Thursday for the two countries’ 13th round of negotiations. Both sides have raised import duties on billions of dollars worth of each other’s goods after the US began the fight and each one is ratcheting up the pressure ahead of the coming meetings against a tumultuous political backdrop in the US where an impeachment inquiry into President Donald Trump is raging.

IANS interviewed Richard Nephew, author, “The Art of Sanctions” and Research Scholar at the Columbia University School of International and Public Affairs about the trajectory of the trade talks, and what it means for countries who have a ringside view of the US-China face-off and are waiting to step in and profit.

Highlights from the conversation are below:

IANS: In your latest Brookings paper, you say that “the events of the last 10 years suggest that Chinese economic sanctions policy is at an inflection point — both in terms of capabilities and readiness”. What does this mean for the US and China and for countries that are standing by and hope to profit from the impasse?

Richard Nephew: “I think the thing that has shifted most is that China is a lot more capable and a lot more willing to use economic tools in order to get its own way in foreign policy. This is something the United States has been doing for a number of years, we’ve seen this with regard to sanctions policy going back 30-40 years.

But for China, over the course of the last 50-60 years, they have emphasized mostly economic integration and getting access to the rest of the global economy for development purposes. Now, they’re starting to see that they can use their access for foreign policy power, which changes things considerably. It means that the Chinese are going to have not only the ability to influence events around the world but also the desire to use their economy to their advantage.

All of those situations are going to create real policy challenges. A US President is going to have to decide whether or not it’s worth taking on the Chinese in particular areas and of course for the countries are going to be affected on the periphery.”

IANS: You speak of the US’ vulnerabilities that China is well-positioned to target — rising income, inequality, and other social ills; an overleveraged corporate sector; and “unsustainable” public debt. So, do you see this adding muscle to China’s new approach towards sanctions not as a response but as an instrument of affirmative policy? How, specifically?

Richard Nephew: I think the Chinese are going to be a lot more able to target those vulnerabilities because they happen to be where China is itself strong. The US needs access to China for markets when you access China for markets of goods that are particularly produced in the United States, including high-end intellectual property, and those sorts of things. And we need access to China because there is a large and burgeoning middle class that should be buying things that we wish to sell. And all that means is China needs us but we need China. And if the Chinese decide that they’re going to close off their economy to keep US companies out that’s going to affect political decision making inside of the US.

It has to because the US is got obvious clear economic interests, that is going to be potentially at stake. What it comes down to is the degree to which China’s prepared to absorb cost itself. The Chinese didn’t start the conflict with the US or the President, but they are fighting it. And I think they’re learning a lot of valuable information about where the US is politically vulnerable, and how they can apply pressure on each one of those vulnerabilities.

IANS: You say that US allies and partners are vulnerable to China even where the US is not. Could you explain?

Richard Nephew: Sure the US may have vulnerabilities to China, but other countries are far more vulnerable, in part because their economies are smaller, and potentially much more dependent on the business opportunities that are available in China.

South Korea is a classic example of this. From the experience a few years ago, when they agreed to have a missile defense radar stationed in the country in order to deal with the threat from North Korea, the Chinese didn’t like that very much, they thought it was a threat to them in their own deterrence. And so they decided to restrict access of Chinese tourists going to South Korea, as well as investment in business activities with self-creating chains that were operating inside of China, imposing real economic costs on South Korea, and potentially creating a course of foreign policy with respect to the South Koreans.

This is the kind of exposure that could potentially occur in hundreds of different places, and with dozens of different countries, because of China’s broad base global investment and development strategy. So all that means, though, is that countries outside of the United States are going to be vulnerable, but their interests are potentially US interests. And so if they decide that they need to come to the US and say, please help us deal with this situation, or please stop doing whatever you’re doing, that’s hurting and upsetting the Chinese in a way that we will not get hurt and upset ourselves, that is going to again affect us.

It doesn’t mean the US will or won’t do certain things. But it does increase the number of data points the number of decisions that need to be taken by the United States when we choose to use economic tools that affect China or other strategic steps that might raise the possibility of a Chinese sanctions response.

IANS: Investment bank research teams have begun putting out studies on how many billions of dollars worth of trade could move out. How complex is that? What could be the wrinkles?

Nephew: The biggest wrinkle, of course, is the Chinese interest. Right? You know, we sometimes think about China, as wanting to just use its power, you know, in all circumstances. That, of course, isn’t the case. And the Chinese economy right now is faltering, in no small part because the foreign business activity has slowed down. The fact that they spend a lot of money building apartment blocks that no one’s living in as part of the glut in money that they had in the country. So from that standpoint, the Chinese themselves have got some vulnerabilities that probably aren’t being anticipated by people who are worried about what China could do. And they don’t fully appreciate that China doesn’t want to do these things, either. That’s wrinkle number one.

Number two, of course, is that as many banks, investment firms, and companies find, if you’re not doing business in China, where are you doing business? Now, obviously, India is a place where you could potentially do some business and other emerging markets where you could spend a lot more time energy and money. But for a number of multilateral banks and companies, you know, they have interests and investments in China for a reason. And I think they want to try and maintain those, to the extent possible.

So there’s definitely potential for China overstepping how it could use its own tools. And I think the Chinese are sensitive to that. And I certainly think that companies and banks and scholars like myself might be overestimating how much the Chinese could do. But that doesn’t undermine the fundamental point, which is that China’s in a much more of a position of a powerful country that can use these tools, rather than just having to take what it gets from everybody else.

IANS: Chinese officials have not commented on a report that Chinese negotiators are seeking to limit the scope of the talks but this is certainly in the mix, we can see the effects on the markets. What’s the strategy if it’s true?

Nephew: I think there are two things that the Chinese are thinking about right now, one, they didn’t start this fight, and they weren’t really excited to have in the first place, I think they would be satisfied if the trade talks resulted in a let’s go back to where things were in January of 2017. If you’re China, that’s a perfectly acceptable outcome. Trying to limit the scope could involve just simply that let’s not try and solve some fundamental systemic problems, like with regard to intellectual property or broader economic rights and investment rights that countries, including the US would want to have in China. I think from that standpoint, it’s totally advantageous to the Chinese to try and limit the scope of those talks.

I think what’s potentially problematic for the Chinese perspective is if you don’t take advantage of this opportunity to settle some issues, it just means you’re going to have this problem come back up again. And a number of the people who are running for president in the United States have already indicated that they intend to continue with the least some of the Trump administration’s approaches with regards to trade disputes with China. So I think they may be advantaged if they try and get a better deal from the Trump administration in the next year than if they hold out for future administration and the United States. So that way, you can at least, you know, get the Chinese economy back to where it was before this whole thing started.

(Nikhila Natarajan can be contacted at nikhilanatarajan@gmail.com)