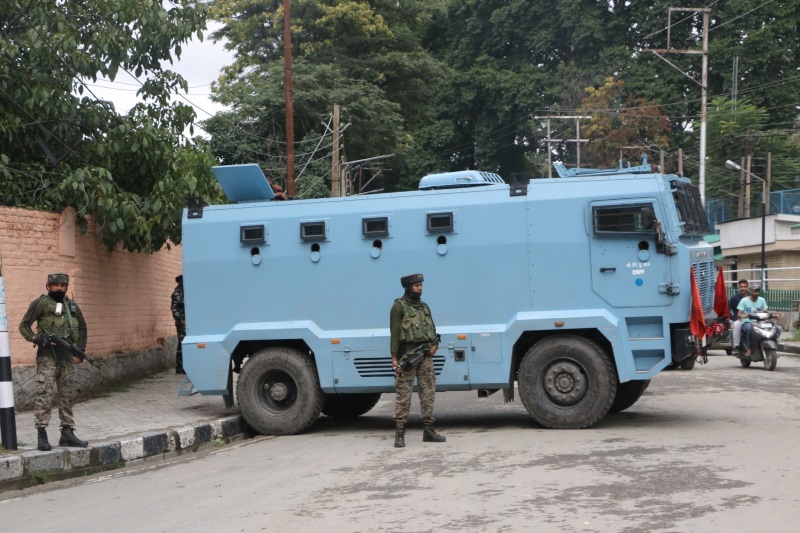 A group of Kashmiri women led by former Jammu & Kashmir Chief Minister Farooq Abdullah’s sister Suraiya and daughter Safiya staged a protest here on Tuesday against the scrapping of Article 370.

The 20-odd women were protesting against the scrapping of Article 370 and 35A on August 5. They were carrying placards which read, ‘Kashmiri brides not for sale’, ‘Why downgrade Jammu and Kashmir state’. Moments after the women protesters spoke to the media, the police swung into action and took them away to the nearby police station.

“We want to know the fate of those who have been detained, that’s why we are protesting,” said Muslim Jan, an academician.

“The government of India is telling the world that we are happy, somebody should speak to us to find out how we are feeling, we are not happy, there are restrictions in Kashmir, we are highlighting those issues,” said Hawa Bashir, an academician.

“We the women of Kashmir disapprove of the unilateral decision taken by the government of India to revoke article 370 and 35A and downgrade the status of Jammu and Kashmir,” a statement by the protesting women said.

“We feel betrayed humiliated and violated as people we demand the restoration of civil liberties and fundamental rights of civilians. We demand demilitarisation of rural and urban areas. We demand the immediate release of detainees. We express outrage against national media for their false and misleading coverage of ground realities in Kashmir.”

The Public Safety Act has been slapped against Farooq who is lodged in his house, G-40, at Srinagar’s posh Gupkar Road. Earlier his daughter Safiya had put up a black flag, seemingly as a mark of protest against the revocation of the special status of J& K outside her house.

The J& K administration has justified the slapping of PSA on the National Conference president on the grounds that he has “tremendous potential to create public disorder in Srinagar and other parts of the Valley”.

The administration has cited several instances since 2016 when he made statements in conflict with the law.
Farooq’s son and former Chief Minister Omar Abdullah is detained in Hari Niwas. Farooq’s brother and senior National Conference leader Mustafa Kamal has been detained at his home.