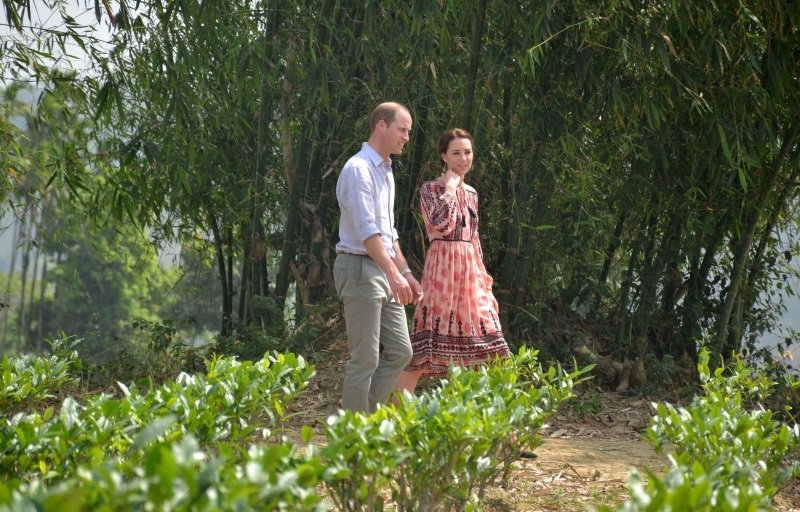 The UK’s visiting Prince William and his wife Kate Middleton on Tuesday met President Arif Alvi and Prime Minister Imran Khan here, as part of their five-day visit to the South Asian country.

The royal couple were greeted by Khan and met President Alvi at the Aiwan-e-Sadr, Geo News reported.

For the meeting with Alvi and Khan, the Duchess of Cambridge opted for white trousers by Maheen Khan paired with a bright green tunic by Catherine Walker. She accessorised the dress with a scarf by Satrangi and earrings by Zeen.

The royal couple kicked off their engagements of the day with a visit to the Model College for Girls, a government-run school for disadvantaged from four to 18-year-olds, benefiting from the Teach for Pakistan programme based on the UK’s Teach First scheme

Kate arrived at the college dressed in a royal blue classic kurta with trousers and dupatta by Pakistani designer Maheen Khan. Upon their arrival in Islamabad on Monday night, the Duchess wore a sky blue kurta.

A visit to the Pakistan National Monument is also part of the royal couple’s agenda for Tuesday.

The five-day visit, which will end on October 18, has been organised at the request of the UK’s Foreign and Commonwealth Office.

The trip was the first of its kind undertaken by any member of the British royal family to Pakistan in 13 years.

According to a statement from Kensington Palace, the British royal couple will visit Islamabad, Lahore, Gilgit-Baltistan and rugged border regions to the west, Dawn news reported.

The visit will span over 1,000 km, and will take in Pakistan’s rich culture, its diverse communities, and its beautiful landscapes, it added.

This trip comes 13 years after William’s father Charles, the Prince of Wales, and the Duchess of Cornwall, Camilla Parker-Bowles, had travelled to Pakistan in 2006 to visit the areas devastated by the October 8, 2005 earthquake.

Mahatma Gandhi library in Kenya will be inaugurated soon