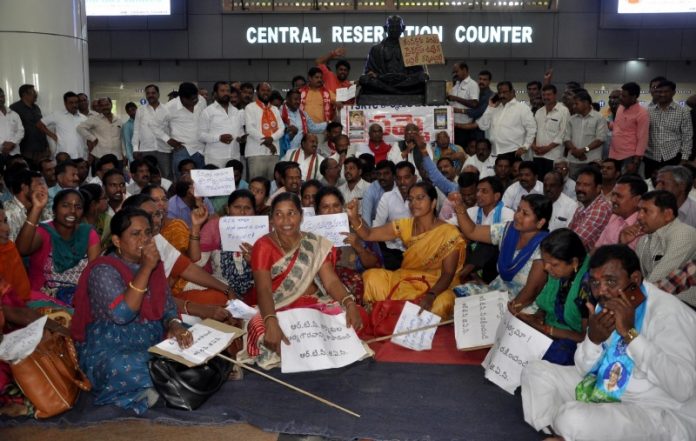 The striking employees presented flowers to the temporary employees to request them not to operate the buses. The protestors were seen meeting temporary drivers and conductors and presenting them roses with a request to cooperate with them by not attending the duties.

The temporary employees were told that the Joint Action Committee (JAC) of the striking employees is also fighting for filling up the vacancies in the transport utility and, hence they will also gain from the ongoing strike.

Taking a tough stand against the employees, the state government called the strike illegal and rejected all their demands. Chief Minister K. Chandrashekhar Rao not only ruled out talks but also declared that except 1,200 all others who failed to join duty before the expiry of deadline cease to be TSRTC employees. He made it clear that there is no question of taking back the employees.

While employees continued their protest with the support of the opposition parties, various trade unions, student bodies and people’s organisations, the TSRTC have been operating bus services with the help of workers recruited on a temporary basis.

TSRTC claims to be operating a majority of the 10,500 buses with police protection at depots and bus stations.

Though Telangana High Court has twice suggested to both the parties to resolve the issue through talks, no initiative was taken by either side to break the impasse. JAC convenor Ashwathama Reddy said they were ready for talks if the government or TSRTC invites them. He said the strike will continue even if the talks are held.

Last week, two employees committed suicide due to depression over losing jobs and not receiving salaries for September. A statewide shutdown was also observed on a call by the JAC and supported by opposition parties, but the government has not budged from its stand.

The High Court is scheduled to resume hearing on Public Interest Litigations (PILs) on October 28 when the government is expected to brief the division bench on the steps taken to resolve the issue.

A High Court judge is also separately hearing a petition filed by the National Mazdoor Union (NMU), seeking direction to the TSRTC to pay the salaries for September. The TSRTC conveyed to the court on Monday that it is not in a position to pay salaries to the employees.

TSRTC in-charge Managing Director Sunil Sharma informed the court that TSRTC requires Rs.239 crore to pay the salaries, but it has only Rs 7.49 crore in its account.

He also stated that the strike by the employees during the festival season so far caused a loss of Rs 125 crore to TSRTC, which has accumulated losses of Rs 5,269 crore.

The JAC leaders on Monday evening called on Governor Tamilisai Soundararajan to seek her intervention. This is the second time that they met the Governor on the issue.

The Governor had last week called Transport Minister P. Ajay Kumar to know about the steps being taken by the government to ensure that people are not inconvenienced. He had deputed Sunil Sharma to Raj Bhavan, who briefed the Governor on the alternate measures taken by TSRTC.

I will not bear this at any cost, I will get Sanjiv back, says...