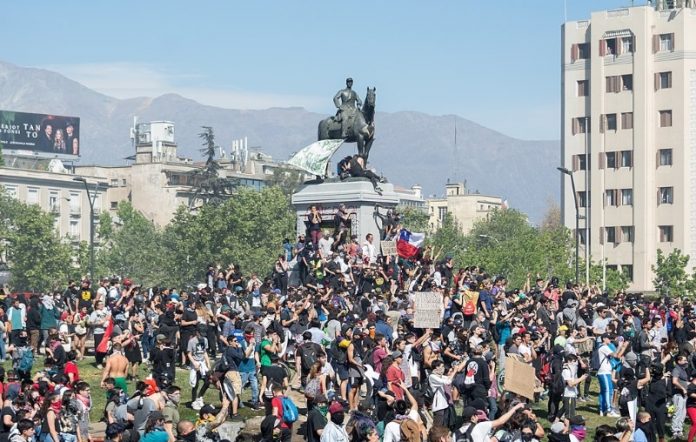 Chiles national human rights institute has said that the number of arrested people nationwide had risen to more than 2,400 people, following the sixth day of massive anti-government protests in various cities.

On Wednesday, the National Institute of Human Rights said that 898 of the arrests occurred in the capital city of Santiago, where close to 100,000 protesters gathered on Wednesday at the Plaza Italia, while 1,512 took place in the rest of the country, reports Efe news.

Of the total 2,410 detained, 1,565 were men, 442 women and 274 minors, although age and gender could not be determined in some cases, according to the institute.

The protests have left more than 18 dead, including four foreigners, five of which were allegedly caused by security officers.

The institute said 535 injured have been reported since October 17, when protests over the steep hike in Santiago metro prices turned into violent clashes and mass civil unrest nationwide. It added that 210 of the injuries were caused by firearms.

Fifty-five criminal cases have been filed by the institute over the situation.

Five of the cases were filed over homicide allegations in which police or military personnel were reportedly involved. There were also eight cases in which the detained claimed being sexually abused by authorities, including strip searches and rape threats.

The institute’s statistics were much larger than the government’s, with the executive office reporting 197 injuries on Wednesday. They further acknowledged torture and abuse cases had occurred at the hands of officers in the last few days.

Hundreds of thousands took to the streets nationwide for a sixth consecutive day, protesting against inequality and the social reform initiatives announced on Tuesday night by President Sebastian Pinera.

The Santiago metro fare hike prompted a wave of protests that evolved into a much larger wave of social discontent, with demonstrators decrying the high prices of electricity and gas, poor distribution of pensions and deficient social health services.

ISB and Microsoft jointly announce “Leading Business Transformation in the Age of AI” for...