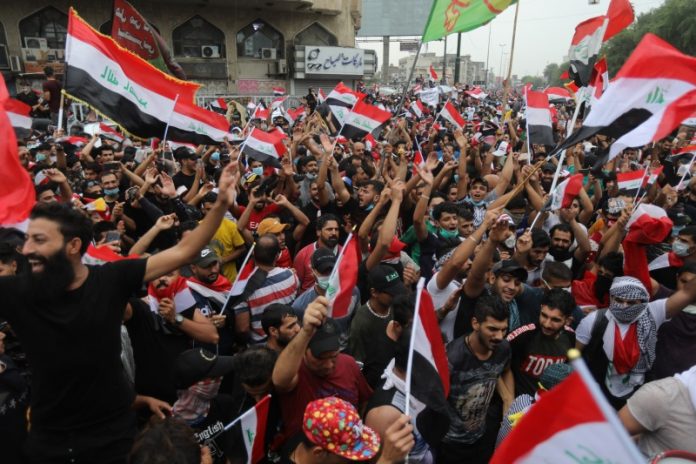 The Iraqi authorities said on Sunday that the death toll from the new wave of nationwide protests over unemployment, corruption and lack of public services has risen to 74 and more than 3,600 wounded.

Ali al-Bayati, a member of the Iraqi Independent High Commission for Human Rights (IHCHR), said in a statement that the clashes between the protesters and the security forces from October 25 to 27 left 74 people killed, the Efe news reported.

He said that most of the deaths were caused by shooting with bullets by guards of the political parties when the protesters attacked their headquarters, in addition to the suffocation by the tear gas.

Al-Bayati also said that a total of 3,654 demonstrators and security members were wounded, mostly due to tear gas, and most of them have left hospitals.

During the three-day protests, up to 90 buildings for government, political headquarters and private were burned by some individuals who wanted to derail the demonstrations from their peaceful path, he added.

According to al-Bayati, the security forces used tear gas, hot water, sound bombs and batons to disperse the demonstrators during the clashes in Baghdad and other provinces.

Hundreds of demonstrators rallied Sunday in Tahrir Square in downtown Baghdad on the eastern side of the Tigris River, but their number increased by the evening, an Interior Ministry source said.

It was obvious that Sunday protests were calmer than the past two days, as the protesters made only a few attempts to cross the nearby al-Jumhouriyah Bridge to reach the Green Zone, which houses the main government offices and some foreign embassies, the source said.

However, clashes also occurred when the riot police fired tear gas canisters and sound bombs to disperse the demonstrators who tried to cross al-Jumhouriyah Bridge and pushed them back to the Tahrir Square, the source added.