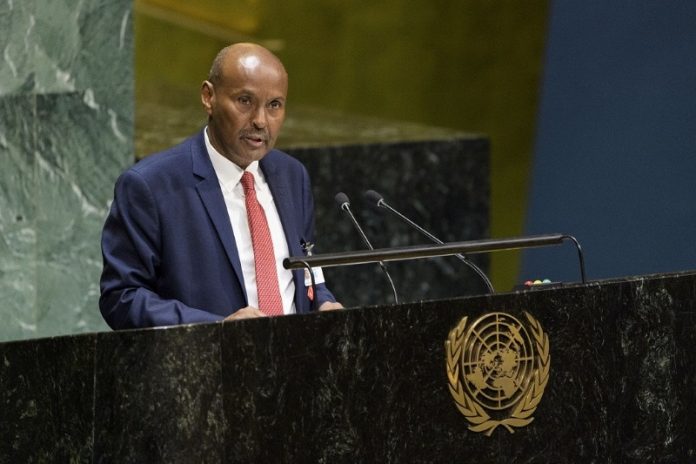 International Court of Justice President Judge Abdulqawi A. Yusuf has told the UN General Assembly that Pakistan had violated its obligations under the Vienna Convention by not allowing consular access to Indian national Kulbhushan Jadhav.

In his address on the occasion of the 74th session of the UNGA, Yusuf said that in its Judgment in the Jadhav case, delivered on July 17, “the Court found that Pakistan had violated its obligations under Article 36 of the Vienna Convention and that appropriate remedies were due in this case”.

In its ruling, the ICJ “considered the reparation and remedies to be granted after it had found that the rights to consular access had been violated”.

“In line with its earlier jurisprudence in other cases dealing with breaches of the Vienna Convention, the Court found that the appropriate remedy was effective review and reconsideration of the conviction and sentence of Mr Jadhav”.

The ICJ also clarified what it considered to be “the requirements of effective review and reconsideration” of the death sentence passed on Jadhav by a military court in Pakistan.

“It stressed that Pakistan must ensure that full weight is given to the effect of the violation of the rights set forth in the Vienna Convention and guarantee that the violation and the possible prejudice caused by the violation are fully examined.

Yusuf said that the Court “is pleased to note that, following its ruling” Pakistan on August 1 confirmed to the ICJ its commitment to implementing the Judgment “in full”.

“In particular, Pakistan stated that Mr Jadhav had been immediately informed of his rights under the Vienna Convention and that the consular post of the High Commission of India in Islamabad had been invited to visit him on 2 August 2019,” he said.

Following the ICJ ruling, Jadhav was allowed consular access. On September 2, Indian Charge d’ Affaires Gaurav Ahluwalia met Jadhav in a Pakistani sub-jail, for the first time since his arrest in 2016.

Jadhav was sentenced to death by a Pakistani military court on charges of espionage and terrorism in April 2017. India approached the ICJ against the death sentence and also the denial of consular access to Jadhav.

On July 17 this year, the ICJ ordered Pakistan to grant consular access to Jadhav and also continued to stay on his execution, as well as “effective” review of the death sentence.

Failures of BJP Came to the Fore, Says Tharoor