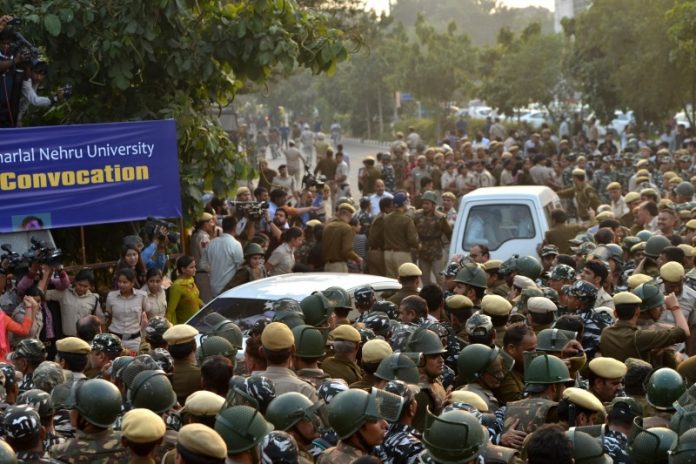 A protest by students on Wednesday forced the administration of the Jawaharlal Nehru University (JNU) here to shift the venue of a crucial meeting of its Executive Council convened for discussing the new draft hostel manual among other important issues.

The students have also called for “occupying” the administration block of the varsity, popularly known as the ‘Pink Palace’.

The students, agitating against fee hike and other changes proposed in the hostel manual, laid virtual siege to the Convention Centre where the JNU Executive Council was to meet, forcing the administration to change the venue to some undisclosed place.

The JNU Students Union (JNUSU) had announced on Tuesday that it will be holding a protest outside the university campus during the Executive Council meeting on Wednesday against the draft hostel manual.

According to an email, purportedly sent by the JNU Registrar and whose screenshot was being circulated on social media by the JNUSU vice-president Saket Moon, the Executive Council members were asked to reach the new venue as soon as possible.

“As you have already been informed telephonically/through JNU security that in case of any problems in conducting EC meeting at Convention centre, the venue may be changed,” the email said.

The students have also accused the varsity administration of deploying police force in the campus, both in uniform and in civilian clothes.

They also accused the administration of locking down the gates of the university, and turning it into a “jail”.

“At a time when the admin wants to push us out of our hostels we have taken up residence inside the Pink Palace,” Balaji appealed to students of JNU.

“The JNUSU appeals all students to come to the Pink Palace to reclaim it from the admin which has illegally made it a den of iniquities and oppression,” he added.

The students’ union has been on a strike against the draft hostel manual, approved by the Inter-Hall administration, which it claims has provisions for the hostel fee hike, dress code and curfew timings.

The agitating students are demanding a meeting with the vice-chancellor on the issue of draft hostel manual which was finalised on October 28.

It is the hostel draft manual that is at the heart of the controversy as it proposes a hike in hostel fees and other changes in the university which the administration claims were due for over 14 years now.

The students now want the EC members to raise the issue and ensure that the draft hostel manual is not implemented.

On Monday, thousands of JNU students clashed with the police as their protest over the steep fee hike escalated, leaving Union Human Resource Development Minister Ramesh Pokhriyal ‘Nishank’ confined for over five hours at the venue of the university’s convocation.