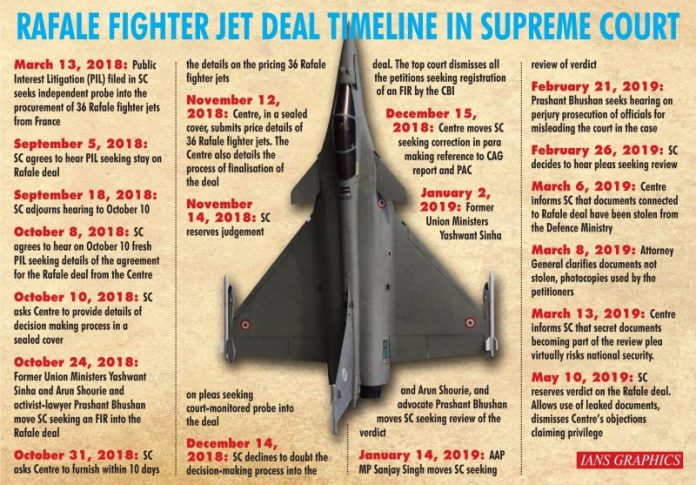 The Supreme Court on Thursday rejected petitions seeking an inquiry into the Rafale fighter jet deal and warned Congress leader Rahul Gandhi to be “more careful in future” as it closed a contempt case against him linked to the issue.

The top court said it found no merit in the pleas for review of its earlier ruling in which it had given a clean chit to the government and ruled out any “roving” inquiry into the deal for procuring 36 fighter planes from French company Dassault.

The court had on May 10 reserved its order on the petitions filed by lawyer Prashant Bhushan and former Union ministers Yashwant Singh and Arun Shourie, seeking a review of its ruling of December last year that there was no occasion to doubt the decision-making process involved in the Rafale deal.

A three-member bench, headed by Chief Justice Ranjan Gogoi and comprising Justices S.K. Kaul and K.M. Joseph said the court does not feel it necessary to order a “roving” inquiry or an FIR into the deal to probe the deal announced in April 2015 during Prime Minister Narendra Modi’s visit to France.

The Rafale deal issue was raked up vigorously by the Congress during campaigning in the last Lok Sabha election, with its then President Rahul Gandhi alleging corruption in it and targeting the Prime Minister through his slogan “Chowkidar chor hai” (watchman is the thief).

Rahul Gandhi once even claimed that the Supreme Court too had said that “Chowkidar chor hai”.

BJP MP Meenakshi Lekhi then approached the Supreme Court, saying Rahul’s comments amounted to contempt of court. The apex court took a serious view of Rahul’s comments attributed to it and asked him to submit an apology, which he did.

In Thursday’s verdict, the top court closed contempt proceedings against Rahul Gandhi but asked him to “remain more careful in future” as he is “an important political person”.

The bench said that Rahul Gandhi, being a person holding a place of importance in the political spectrum, should have been more careful before attributing to the top court certain things which were not part of the order.

Defence Minister Rajnath Singh welcomed the Supreme Court verdict in the Rafale case, saying the government stands vindicated with the dismissal of the review petition and demanded that the Congress should apologise for “misleading people”.

He termed the allegations of corruption by the opposition “as nothing but an attempt to malign the clean and honest image of Prime Minister Modi and his government”.

“I wholeheartedly welcome the Supreme Court’s categorical dismissal of the review petitions in the Rafale case and with this pronouncement, the NDA government stands vindicated. The SC verdict is also a judgement on our government’s transparency in decision making,” Singh tweeted.

“The people of India will not forgive the Congress for their slanderous campaign and calumny. Congress should apologise for misleading the people,” he added.

Insisting that the purchase of Rafale jets was done in a “completely transparent manner, keeping in mind the urgency to update and upgrade India’s defence preparedness,” the Defence Minister said, “The issues pertaining to defence preparedness and national security should never be politicised.”

He said, “The allegations made by certain political parties and their leaders in the Rafale jet purchase were extremely unfortunate, unwarranted and laced with malicious intent. The verdict has rightly cautioned such politicians to be careful while making wild allegations.”