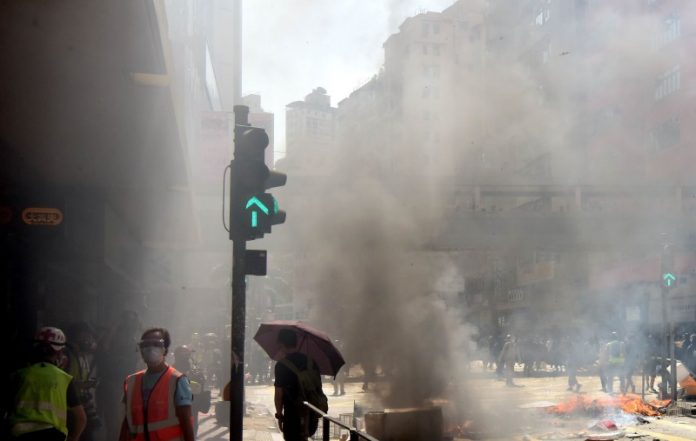 Hong Kong Justice Minister Teresa Cheng was injured when she fell after being surrounded by protesters, in what was the first physical confrontation between a cabinet official and anti-government demonstrators.

On Thursday, Cheng, who is in London to promote Hong Kong as a centre of dispute resolution, appeared calm but shocked while surrounded for several minutes by at least 30 protesters angry about the administration’s handling of the anti-government protests, the South China Morning Post reported on Friday.

She later made a report to the London police and asked them “take the case seriously and put the culprits to justice”, her office said in a statement.

“The Secretary for Justice castigates the violent mob in London today causing her serious bodily harm on her way to an event venue,” it said.

“The secretary denounces all forms of violence and radicalism depriving others’ legitimate rights in the pretext of pursuing their political ideals, which would never be in the interest of Hong Kong and any civilised society.”

Videos circulated on Twitter did not reveal whether someone pushed Cheng onto the ground or she fell.

“Shame on you” and “five demands, not one less” were some of the slogans shouted at her during the several-minute-long confrontation in London.

“The barbaric behaviour got beyond the line of a civic society, it should be strongly condemned,” the South China Morning Post quoted Lam as saying.

At least one demonstrator has died during the protests, which began in June when the government tried to introduce an extradition law that would have allowed the transfer of fugitives between Hong Kong and jurisdictions it doesn’t currently have an agreement with, including mainland China.

The law has since been withdrawn. 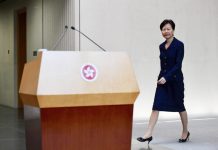 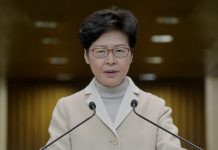 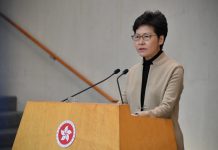