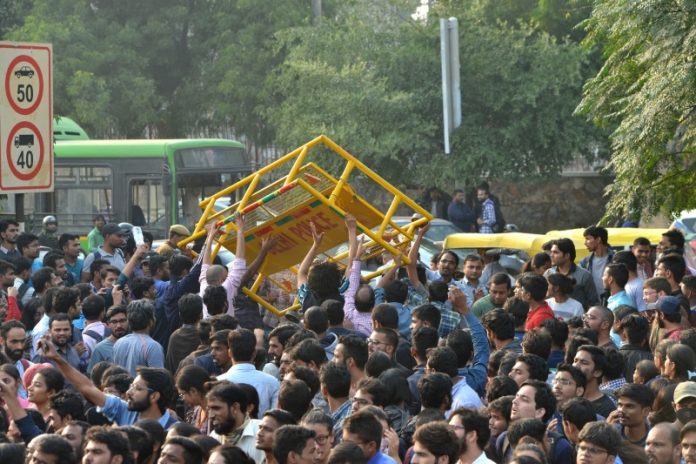 Agitating Jawaharlal Nehru University (JNU) students, who allegedly vandalised the varsity’s administration block, charged the “administration and their cronies” with the illegal act and said that their fight is against fee hike and the “authoritarian ways” of administrative functioning.

“Students with their future at stake due to the fee hike can never be perpetuators of any violence or undemocratic action. The acts of miscreants are a conspiracy to defame the university and its democratic culture by the right-wing forces,” said JNUSU President Aishe Gosh in a statement.

The students have also occupied the block that houses offices of the top brass of the university’s administration, including Vice-Chancellor, apart from allegedly vandalising Swami Vivekananda bust.

However, Vice-Chancellor Mamidala Jagadesh Kumar said that the university has identified the students who vandalised the administration block and is preparing to file an FIR against them.

He also said that female security guards deployed outside the administration block were beaten up on Wednesday.

Earlier some agitating students of the varsity occupied the administration block, defaced almost every wall of the block with graffiti against the JNU administration and the Rashtriya Swayamsevak Sangh (RSS).

The protesters claimed the graffiti represented the JNU Vice-Chancellor who, they allege, worked on Sangh’s instructions.