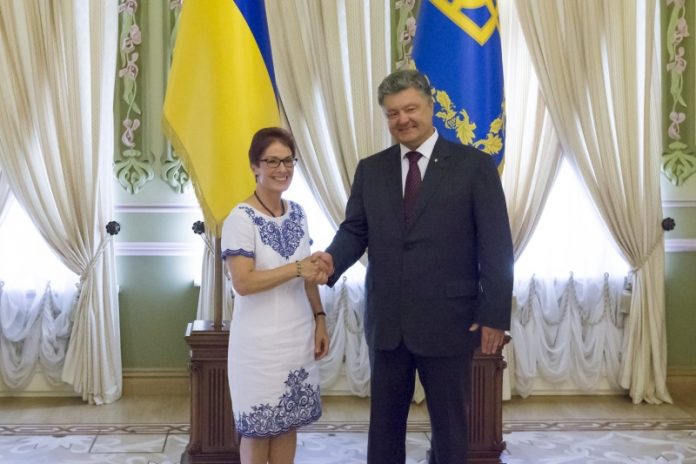 US President Donald Trump made a digital intrusion into the impeachment hearing with a tweet disparaging a witness in real time while she was testifying, setting off accusations from Democrats that he was intimidating her and the possibility of another charge against him.

Marie Yovanovitch, who was ousted by Trump from her Ambassadorship in Ukraine, was testifying on Friday before the impeachment inquiry in Washington when he shot off the tweet: “Everywhere Marie Yovanovitch went turned bad. She started off in Somalia, how did that go? Then fast forward to Ukraine, where the new Ukrainian President spoke unfavourably about her.”

Adam Schiff, the chair of the House of Representatives Intelligence Committee who is presiding over the hearings, interrupted the hearings to read the tweet saying: “Now the President in real time is attacking you.”

He indicated it could make other witnesses reluctant to come forward.

Trump, however, denied the accusation, telling reporters: “I have freedom of speech, just as other people do. But they’ve taken away the Republicans’ rights.”

The incident puts a spotlight on the emerging, all encompassing role of social media that can intrude in real-time in legislative or legal proceedings in unprecedented ways.

The impeachment inquiry is looking into allegations that Trump withheld military aid worth about $400 million to force Ukraine President Volodymyr Zelensky to conduct an inquiry into former Vice President Joe Biden’s son, Hunter’s business dealings in Ukraine and the firing at the behest of Biden of a prosecutor looking into a company he was involved with.

Another matter Trump was interested in was reported that Ukraine was behind the leak of Democratic Party emails during the 2016 elections.

Friday’s hearing ended in chaos after Schiff made a sweeping condemnation of Republicans for defending Trump and adjourned the meeting refusing them the right to reply. While they continued to demand to answer his attack, the Democrats shouted them down and clapped.

In another drama, while the hearing was underway, Trump’s confidante Roger Stone was convicted in a federal court of making false statements to the Intelligence Committee and obstructing justice over his involvement in a WikiLeaks disclosure of Democratic party emails during the 2016 election campaign.

Friday was the second public hearing in the impeachment proceedings after weeks of secret testimonies that were, however, leaked.

However, after Yovannovitch’s testimony, the House Intelligence Committee that is holding the impeachment hearings headed to the basement chamber for a secret session to hear another diplomat tell the panel about an overheard phone call between Trump and Gordon Sondland, the Ambassador to the European Union.

Soon after, the media was rife with leaked accounts of the hearing at which David Holmes, who had worked at the embassy in Kiev, is reported to have said he heard Trump ask Sondland if Zelensky would conduct an inquiry and the ambassador reply that he would do anything he was asked to do.

This was for the Democrats to show that Trump was trying to pressure Zelensky to conduct the inquiry.

During the public hearing, Yovanovitch was asked about Trump telling Zelensky in a phone call that she “was bad news and the people she was dealing with in Ukraine were bad news”.

She said that “it sounded like a threat” and she was “shocked, appalled, devastated”.

Yovanovitch was suddenly recalled from Kyiv and William Taylor, who testified on Wednesday was sent to take her place.

Democrats said that her removal demoralised the foreign service and other public servants and interfered with US diplomacy for private benefit.

Trump’s personal lawyer Rudy Giuliani, who was pursuing the inquiry against the Bidens and the email leaks in Ukraine, took on a central role in the hearing.

Yovanovitch narrated instances of Giuliani’s interference in Ukraine and agreed with the Democrats he was behind a smear campaign against her that led to her ouster.

Defending Trump, a Republican on the Intelligence Committee, Chris Stewart, asked her point-blank about the substantive Democrat accusations: “Do you have any information regarding any criminal activity that the president of the United States has been involved with at all?”

“The American people know this is unfair,” he said referring to the impeachment.

The thrust of the Democrat’s questioning of her was to show that Trump undercut her and the diplomatic corps to further his personal cause against Biden, a possible rival in next year’s election. But she could not address the Democrat’s accusations against Trump directly.

While Democrats talked of corruption in Ukraine, the Republicans brought up Hunter Biden’s $50,000 a month position at a Ukrainian gas company even though he had no experience in the field and the former vice president’s role in removing the prosecutor investigating the company.

She agreed that there seemed to be an appearance of a conflict of interest in Joe Biden’s role, but did not agree that his campaign to remove the prosecutor was linked to his son’s company, but said it was because the official was corrupt.

Earlier during the hearings, Schiff abruptly refused to let a Republican woman member, Elise Stefani, ask questions of Yovanovitch in place of Devin Nunes the ranking member of the Intelligence Committee leading to protests by her party.

Trump later complained to reporters that Republicans were being gagged.