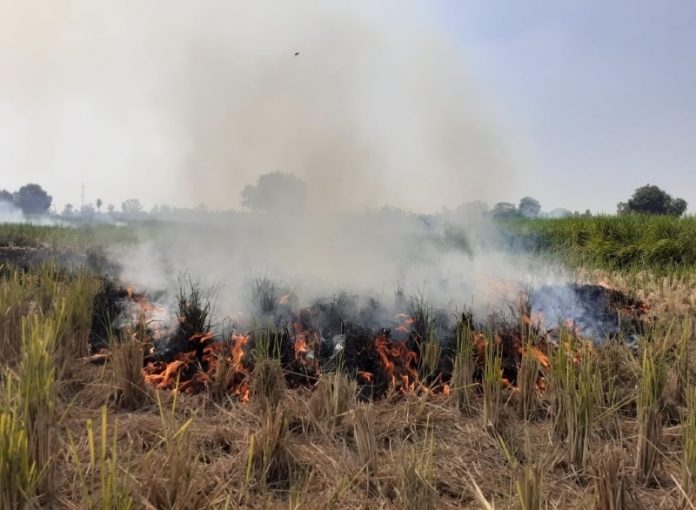 About a dozen farmers have been arrested by police in Uttar Pradesh for allegedly burning crop residue in their farms in the last 10 days.

The district administration has also imposed fines adding up to Rs 13.5 lakh on 300 farmers in the district.

It has also issued show cause notices to five village heads of Nandgaon and Chhata block under the Panchayat Raj Act section, which provides for the removal of village heads for having a higher number of cases of stubble burning in their respective villages.

Village heads are accountable for preventing stubble burning in their respective villages and as well environment pollution.

Mathura is among the 10 districts that have been on the radar for the highest incidents of stubble burning and the Yogi Adityanath government has also sought a report from the district officials on the issue.

He said that the administration had been keeping continuous track on such cases and if farmers continued to violate rules, punitive action was to be taken against them.

Five village heads from Deh, Pulwana, Hathana, Kharaut, and Phalain had been issued show cause notices as large number of stubble burning cases were reported there.

“If they fail to give an appropriate reply, they will be removed from their post,” the district magistrate said.

SSP Mathura Shalabh Mathur said that those who were arrested for burning crop residue in their farms were booked under section 278 (making atmosphere noxious to health) of IPC and those who had collected stubble at the corner of their farms or some secluded place for burning were booked under section 151 (arrest to prevent the commission of cognizable offence) of the CrPC.

He said that some farmers, who tried to prevent government officials from discharging their duties, were booked under section 353 (Assault or criminal force to deter public servant from discharge of his duty) of IPC.

The 10 arrested farmers have been identified as Niranjan Singh, Puran Singh, his wife Veervati, Veerpal Singh, and Pappu from Chhata area. Three farmers arrested from Kosikalan include Gulab Singh, Monu, and Govind while Ashok Kumar, Manvendra, and Raju were arrested from Shergarh area and Mohan Lal from Nandgaon.