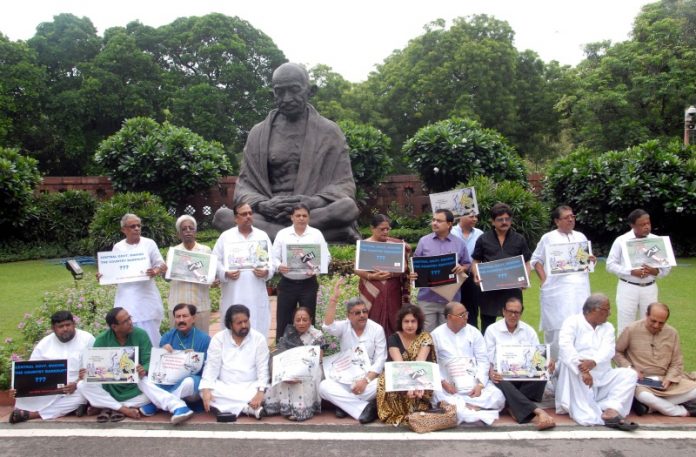 The Congress on Monday held protests in Parliament against the Bharatiya Janata Party (BJP) for forming a government in Maharashtra.

The Congress MPs gathered in front of the Gandhi statue and raised slogans of “Modi government shame shame” and “save our democracy”. Party president Sonia Gandhi also joined the protest.

Inside the House, two Congress MPs, including T.N. Prathapan and Hibi Eden, showed a big banner, and other MPs also put up placards and raised slogans against the Modi government saying “Democracy has been killed in Maharashtra”.

As the two MPs did not heed to Speaker’s request, Birla directed marshals to keep them out of the House.

The Congress MPs manhandled with the marshals when they were asked to go out of the House.

The protests were being held even as a hearing over the same was underway in the Supreme Court, where the apex court asked the Solicitor General to produce letters of support used by Devendra Fadnavis in staking claim to form the government.

In a sudden development on Saturday, Devendra Fadnavis was sworn in as the Maharashtra Chief Minister and Nationalist Communist Party (NCP) leader Ajit Pawar as his deputy by Governor Bhagat Singh Koshyari.

The Shiv Sena, Congress and NCP, the three other parties, who were planning to form a government, have challenged the government formation and knocked on the doors of the Supreme Court.