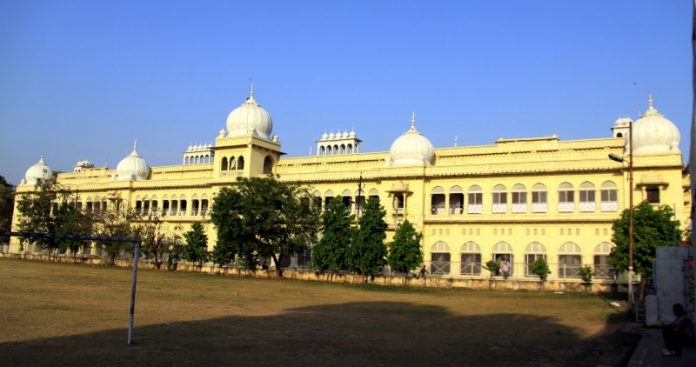 Lucknow University kicked off its year-long centenary celebrations with a morning walk by the students and teaching staffs from the Chhatrapati Shivaji sports ground on the campus.

The university also threw open its gates for the common people on Monday on the occasion.

The idea of starting a university in Lucknow was first mooted by Raja Sir Mohammad Ali Mohammad Khan, Khan Bahadur, of Mahmudabad.

When Sir Harcourt Butler, was appointed Lieutenant-Governor of the United Provinces, he took the first step to set up a general committee of educationists and persons interested in university education in November 1919.

The Lucknow University Act, No. V of 1920 received the assent of the Lieutenant-Governor on November 1, and of the Governor-General on November 25, 1920.

Former minister Arvind Singh Gope and UP minister Brijesh Pathak have been presidents of the Students Union in the Lucknow University.

However, the university – much to the chagrin of the alumni-has not finalized on a plan for the centenary celebrations.

“We have an officiating vice -chancellor and there is no vision for the celebrations. We would like to invite all old students for different programmes but no one knows what is happening,” said a senior faculty member of the University on Monday.

LU spokesperson Durgesh Srivastava, when asked, said that a plantation drive will be held on Monday and 100 saplings to mark the centenary year will be planted on the campus.

Visitors can go to the Anthropological Museum, known for its ancient artefacts of tribal culture collected from across the country, and also the zoology and geology museums would also remain open, he added.

Meanwhile, career counsellor Amrita Dass, who is gold medalist from the university from where she completed her MA (western history), has preserved her old identity cards with black and white passport size photographs.

“Our well furnished classroom was referred to as an ‘academic cloister’. The classes were very interesting and my classmates of about 50 students were a great group to be with. I also enjoyed the time spent in the well equipped Tagore Library and the canteen was known for its special brew of tea and samosas,” she said.

Dr Muzammil went on to become head of the Department of Economics. “Those were the best years of my life,” he said.

This Verdict is to Stop BJP’s Ashwamedha Yatra, Says Kumaraswamy