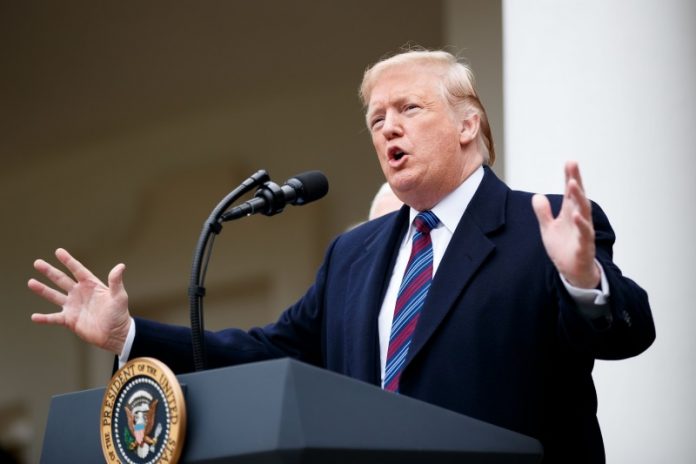 US President Donald Trump has said that the US will designate Mexican drug cartels as foreign terrorist organisations.

“I will be designating the cartels,” Donald Trump said on being asked about the issue during a radio interview on Tuesday.

Trump said he has been “working on that for the last 90 days”, Efe news reported.

“You know, the designation is not that easy, you have to go through a process, and we are well into that process”, the US President said.

When asked what measures he would take after the designation and if drone strikes were a possibility, he said, “I don’t want to say what I am going to do”.

Deadly violence by Mexican drug cartels has gained fresh attention in the US recently after the killing of nine Mormon women and children who were dual Mexican and American citizens.

After the massacre, Trump in a tweet offered to help Mexico “wage WAR on the drug cartels and wipe them off the face of the earth”.

Trump in his interview claimed to have offered to collaborate with Mexican president Andres Manuel Lopez Obrador in the fight against the cartels, saying, “I’ve actually offered him to let us go in and clean it out. He so far has rejected the offer, but at some point, something has to be done.”

Mexico’s Foreign Minister Marcelo Ebrard responded to Trump’s statements Tuesday, saying that the country “will never allow any actions that signifies a violation of its national sovereignty. We will act firmly”.

“I have already conveyed the (our) position to the EU as well as our resolve to tackle transnational organised crime. Mutual respect is the basis of cooperation,” he added on Twitter.

Mexico’s Foreign Ministry had earlier said it would seek a high-level meeting with the US “as soon as possible” and that it had contacted several US authorities “to understand the content and scope of what is stated” with regard to the planned designations.

The ministry said that from what it inferred from Trump, and from the information provided by the US authorities so far, “it is estimated that the meeting proposed by Mexico could take place in the near future.”

The US has a long list of organisations it designates as terrorists, including Lebanon’s Hezbollah, Palestinian Territories’ Hamas, Colombia’s National Liberation Army and Iran’s Islamic Revolutionary Guard Corps.

The designation of cartels as terrorist organisations could lead to new sanctions, as well as the allocation of more resources to combat them.