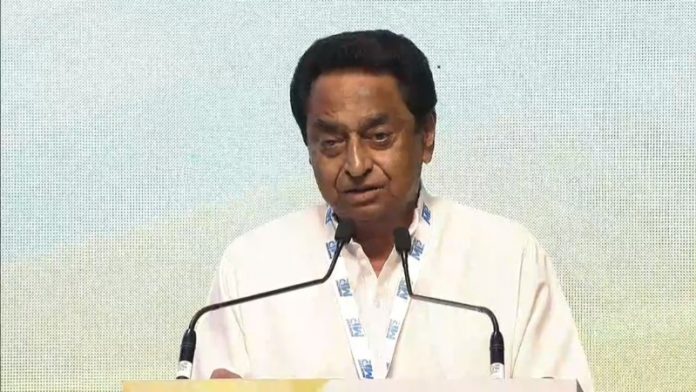 Madhya Pradesh chief minister Kamal Nath has asked Prime Minister Modi if he is with Gandhi or Nathuram Godse.

His tweet follows the Bhopal Lok Sabha member Pragya Thakur’s repeated mention of Godse as a patriot. Kamal Nath said if Modi had said he would never be able to forgive Pragya for calling Godse a patriot, should he not act now when she has reiterated her views on Gandhi’s assassin in the sanctum of the nation’s temple of democracy.

The nation now wants to know from the BJP whether it is with Gandhiji or with Godse? They should clarify this now. If he is with Gandhiji, then the BJP should take strict action against those who glorify Gandhi’s killer.

BJP MP Pragya Thakur again referred to Mahatma Gandhi’s assassin Nathuram Godse as a “deshbhakt”, this time during a debate in the Lok Sabha, triggering a protest by opposition members.

Thakur interrupted DMK member A Raja who was citing a statement by Godse on why he killed Mahatma Gandhi, during a discussion on the Special Protection Group (Amendment) Bill. “Do not cite the examples of a patriot,” Thakur shouted to tell Raja. The Speaker had expunged the Bhopal MP’s remark though.

While the opposition members protested the interruption by Thakur, the BJP members persuaded her to sit down. Asked about her statement outside Parliament, Thakur said she would reply on Thursday. “Pehle usko poora suniye, mai kal dungi jawab (Listen to the whole thing first, I will reply tomorrow),” she said.

The Malegaon blast accused had incurred the PM’s wrath during the run-up to the Lok Sabha elections when she called Godse a “true patriot” during a road show in Madhya Pradesh.

“Nathuram Godseji deshbhakt the, hai, aur rahenge. Unko aatankwadi kahne wale log swayam ki gireban me jhaank kar dekhe. Chunav mein aise logon ko jawab de diya jayega. (Nathuram Godse was a patriot, is a patriot, and will remain a patriot those who call him a terrorist should look within they will get a reply in this election),” she had said.

Prime Minister Narendra Modi had then said in a TV interview that he would never forgive Thakur for the remark. “The remarks made about Gandhiji or Nathuram Godse are very bad and very wrong for society. She has sought an apology but I would never be able to forgive her fully,” he had said.

In another controversial decision, the Bhopal MP was recently nominated to the parliamentary consultative committee of the Ministry of Defence, despite facing trial in the Malegaon blast case.

I-League: TRAU FC look to get house in order against Punjab