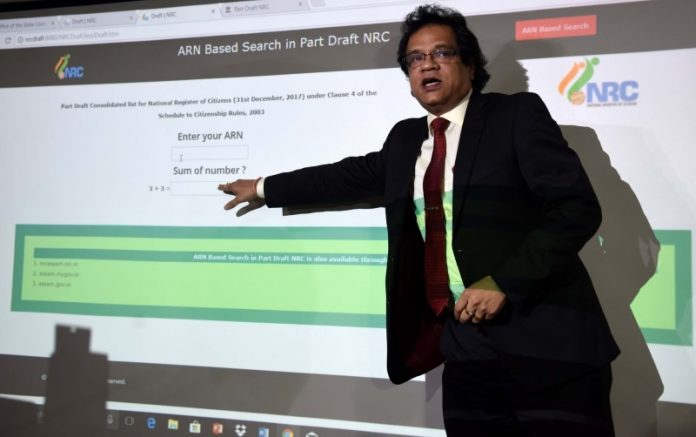 A civil society organisation in Assam has filed an FIR with the Central Bureau of Investigation (CBI) against former state coordinator of the National Register of Citizens (NRC), Prateek Hajela, for alleged misappropriation of funds meant for the NRC project.

One Rajib Deka of the Assam Public Works (APW) has filed the FIR at the Guwahati office of the CBI on Thursday.

APW is one of the main petitioners which had approached the Supreme Court seeking to update the NRC to detect illegal foreigners living in the state.

After the publication of the final NRC on August 31 this year, Hajela was transferred to Madhya Pradesh under the direction of the Supreme Court. Hajela relinquished his charge on November 11 and left the state.

It is a known fact that the Government of India has spent the whole expenditure of the aforesaid process through the then NRC coordinator Hajela. “A large number of illegalities and financial irregularities has been committed in making different expenditure,” Deka said in the FIR.

“Hajela appointed a number of retired government servants as his advisors and they were provided with new vehicles and handsome pay packages. As per the information, a huge corruption took place in this process,” he said, adding that while money had been spent, it is not known what kind of work was done by the advisors.

“There are no records available in this regard, and it is not audited by the CAG,” he said.

Deka further said that a large number of school teachers were engaged in this process of NRC updation by Hajela.

“However, no remuneration has been paid to them but huge money is shown to have been paid to such teachers. In this process, a huge amount of money has been misappropriated by the previous NRC coordinator Hajela with his close aides,” he alleged.

“For the updation of the NRC, about 10,000 laptops had been purchased by Hajela at the cost of Rs 44,000 each. However, on a survey it has come to light that the market value of such laptop is Rs 22,500 per piece. This is another instance of corruption in the process of NRC updation,” Deka said in the FIR.

“The above instances clearly demonstrate that huge corruption has taken place in the process of updation of NRC with the active role of Hajela with his close aides. Under the aforesaid circumstances, it is, therefore, requested that an investigation may be carried out to bring out the truth,” he said.

Daily Intake of This Drug can Cause Certain Cancers in men