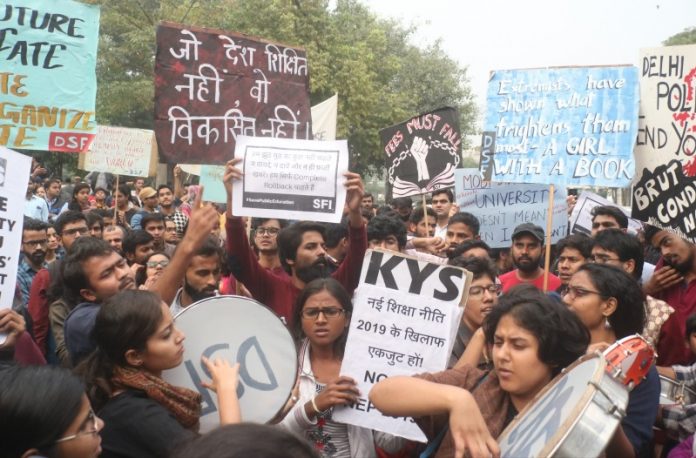 With their protest against the proposed hostel fee hike entering a month, the students’ union of the JNU on Thursday said it is yet to take a call on boycotting the exams, due next month.

“We also want normalcy on the campus. We also want to get back to studies, but the Vice Chancellor is not ready for a dialogue. Whatever we could do, we have done. Some lecture series are happening. It’s not that classes are completely shut, but we haven’t taken a decision on exams,” said JNUSU President Aishe Ghosh.

Ghosh and other office-bearers alleged that students at the forefront of the protest, including JNUSU Vice President Saket Moon and General Secretary Satish Chandra Yadav, were being targeted by the government, with police and security agencies being sent to question and “torture” their families.

“They want to force us to dilute our protest. They have sent police and security agencies to my house, to Satish’s and others to harass our families,” said Saket Moon.

Speaking to media gathered outside the administrative block of the university, Moon admitted that students stood to lose if the agitation prolonged. “For every minute of the protest, we are losing out on our studies. However, we cannot go back to normalcy till there is a hostel fee rollback,” he added.

Earlier in the day, JNU teachers’ association requested for an appointment with HRD Minister Ramesh Pokhriyal.

The JNU students have been protesting against the varsity administration’s move to hike hostel, mess and security fees, reportedly by 400 per cent. It has also limited the hostel timings.

While the JNU administration later announced a 50 per cent concession for those belonging to the BPL (below the poverty line) category, the students rejected it, terming it as an eyewash and demanded a total rollback of the proposed hostel fee hike.

However, on Tuesday, the varsity further extended the concession on service and utility charges, which would benefit all students and not just BPL students.