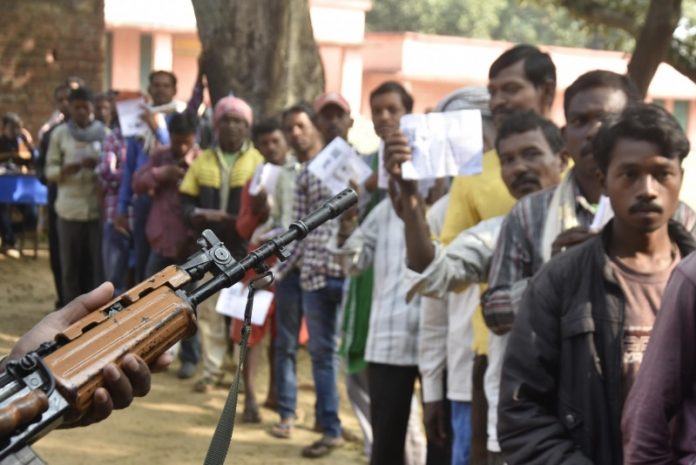 Jharkhand witnessed around 63 per cent polling in the first phase of the vote in the 13 Assembly constituencies on Saturday.

Defying the Maoist boycott call, voters queued up in large numbers at polling stations since morning to cast their votes.

According to the Election Commission, the polling per cent was 62.87 per cent. The highest polling 67.04 per cent was recorded at Bishnunpur and the lowest 57.61 per cent at the Manika seat.

Minor clashes were reported between workers of the Bharatiya Janata Party (BJP) and the Congress in the Daltanganj Assembly seat. Congress candidate K.N. Triptahy waved his licenced revolver in the air after he was stopped from entering a polling booth.

The Election Commission has sought a report on the incident and has cancelled his licence.

According to Election Commission, of the 4,892 booths in the first phase, 4,585 were located in rural areas and 307 in urban areas. Of this, 121 were Sakhi booths and 417 model booths. In the first phase, the webcasting facility was provided at 1,262 booths.

Heavy security arrangements had been made for polling. Helicopters were used for airlifting and dropping of the poll officials in difficult terrain and Maoist-hit areas.

The BJP is fighting 12 seats and supporting Independent on one seat. The Jharkhand Mukti Morcha (JMM), the Congress, the RJD fighting poll in the alliance have fielded candidates in four, six and three seats, respectively.

No talks with US, says Ayatollah Khamenei